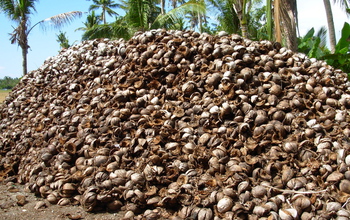 About 50 billion coconuts fall from trees annually; the husks and shells are typically discarded.

When Elisa Teipel and her collaborators began their research several years ago, their goal was to take an agricultural waste product of little value--in this case, fibers extracted from coconut husks--and turn it into an environmentally-friendly, valuable commodity.

Equally important, Teipel, along with colleagues Ryan Vano, husband Blake Teipel and Matt Kirby wanted the project to help the local economies where they obtained the raw materials.

Today their new company, the College Station, Texas-based Essentium Materials, is turning out automotive trunk liners, load floors (battery pack covers in electric cars) and living wall planters, among other things, with technology they developed that produces a composite material made of coconut husks combined with recycled plastics.

The result is greener and cost neutral, as well as stronger and stiffer, than the traditional all-synthetic plastic fibers, and with natural anti-microbial properties due to a high lignin content.

"The coolest part is seeing something that was once just waste become a new resource," Teipel says. "Also, it is benefitting both the environment and the communities in developing nations where the coconuts are grown."

The researchers estimate that replacing synthetic polyester fibers with coconut husk fibers, known as coir, will reduce petroleum consumption by 2 to 4 million barrels and carbon dioxide emissions by 450,000 tons annually.

Also, the improved performance and lower weight of these materials will lead to cost savings through increased fuel economy, saving up to 3 million gallons of gasoline per year in the United States, according to Teipel.

Ninety-five percent of the 50 billion coconuts grown worldwide are owned by 10 million coconut farmers whose average income is less than $2 a day, she says. Moreover, about 85 percent of the coconut husks currently create pollution when they are treated like trash. "The successful adoption of these new composite materials within North American markets would in many cases double the annual income for these farmers," she says.

Essentium's work is supported by a $1,018,475 grant from the National Science Foundation (NSF) through its Small Business Innovation Research program (SBIR) in the Directorate for Engineering.

"Projects that use waste materials as a feedstock to create value-added products are a perfect fit for NSF SBIR because we look to support entrepreneurs who can 'do good by doing well,"' says Ben Schrag, the project's program director at NSF. "We believe that small businesses with innovative technology hold the key to solving many of the broader societal and environmental problems faced by the country and the world.

"New material concepts that incorporate waste materials are also becoming increasingly attractive to many consumers and businesses," he adds. "This is creating significant opportunities for shrewd and dedicated technologists and entrepreneurs."

The idea to use coconut husk material originated about seven years ago, when Teipel was in graduate school.

"We were really interested in seeing how we could help people in other parts of the world with economic development work," she says. "Initially, we were looking in Papua New Guinea. A former professor of mine, Walter Bradley, who has since retired from Baylor University, suggested we look at available materials and what we could do with them, initially to produce electricity.

"Coconut was one of the most readily available materials that farmers and people in the community had access to," she adds. "So we took a look and wondered whether coconut was a viable engineering material, and what we could do with it."

At the time, farmers harvested coconuts only to produce coconut milk and coconut oil, while the husks and fiber were considered waste. Yet the students believed they could take the fibers and convert them into a usable product while "elevating both the dignity of the people and the dignity of the resources," she says.

It was a process of trial and error to develop the material in the lab, then try it in a production setting. "The initial phase of the research was to try to understand the inherent properties of these waste materials to determine viable applications," Teipel says. "We discovered that coconut fiber, for example, is a large, stiff fiber with a very high elongation (25-40 percent), making it a natural choice for molded automotive products."

The team then worked with several manufacturing companies to develop different material blends and densities, testing out material blends, such as experimenting with different binder fibers, and processing techniques. "During the commercial development phase, it was important to ensure that these materials with natural content could pass the strict automotive standards such as odor and flammability in order to be approved for use in vehicles," she says.

Today, Essentium works in the Philippines with local community development groups to extract the fibers from the husks and shells, work conducted close to the plants where the coconut milk and meat processing occurs.

The fibers are separated from the husk, then packed and shipped to the United States where they are combined with other fibers, often recycled and reclaimed fibers, and turned into a material that resembles felt. This nonwoven felt can then be molded or formed into parts that can go into a vehicle.

"The coconut fiber nonwoven material, the first product from the EssenTex™ line, was launched in the Ford Focus electric vehicle in the load floor," Teipel says. "There are other parts that should be released in the next 12 months. Outside of automotive, the EssenTex line has found a home as a moisture mat absorber in the BrightGreen living wall planter, available at Williams Sonoma and Home Depot nationwide."

Essentium also has coconut waste products from the coconut shell in a bio-recycled part on the Ford F-250 Super Duty, and in a kitchen cutting board called "Coco-poly," available at Bed, Bath & Beyond, she adds.

"Our company was built from the idea that you can turn waste into resource," she says. "New materials provide opportunities for engineering applications worldwide and, more importantly, for farmers abroad waste can be new-found treasure.

"As materials people, we understand the importance of selecting and developing the right materials for the job, and recognize that there are many waste streams that can be utilized to create new and better materials and products that have more benefits than just better performance," she adds. "Ultimately, our company is about transforming waste in order to transform people's lives. We want our engineering decisions to improve people's lives and make the world a better place."