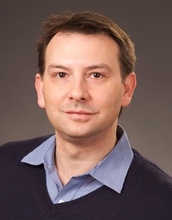 Bijan Pesaran is an associate professor of neural science at New York University.

People not only use their eyes to see, but also to move. It takes less than a fraction of a second to execute the loop that travels from the brain to the eyes, and then to the hands and/or arms. Bijan Pesaran is trying to figure out what occurs in the brain during this process.

"Eye-hand coordination is the result of a complex interplay between two systems of the brain, but there are many regions where this interaction takes place," says Pesaran, an associate professor of neural science at New York University. "One of the things about the current state of knowledge is that it is focused on the different pieces of the brain and how each works individually. Relatively little work has been done to link how they work together at the cellular level."

The thrust of his research involves studying how neurons in these parts of the brain communicate with one another.

"The cerebral cortex contains a mosaic of brain areas that are connected to form distributed networks," says the National Science Foundation (NSF)-funded scientist. "In the frontal and parietal cortex, these networks are specialized for movements such as saccadic (voluntary) eye movements and reaches, that is, hand and arm movements. Before each movement we decide to make, these areas contain specific patterns of neural activity which can be used to predict what we will do."

A more sophisticated understanding of the brain's role in eye-hand coordination can be an important model for discovering how brain systems interact to carry out cognitive processes in general, he says. Such insights could lead to new neural technologies that translate thoughts into actions, for example, to control a robotic arm or prompt speech.

"There is a whole new set of technologies called neural prostheses," Pesaran says. "In the future, there could be devices in the brain that will help people remember, to think more clearly and to help them move."

Using eye movements to prompt hand and arm movements involves building a spatial representation, "which is improved by moving our eyes," he says. "The command that is sent to the eyes moves the eyes, which effectively measure space when they move, and that is used to improve the accuracy of the reach. We move our eyes to improve our movement, not just to see better."

He often describes the behavior of high level ping pong players to explain how it works.

"You keep your eye on the ball so you know where it is, so you can hit it," he says. "But right up until the minute you hit the ball, something important is happening, which is that your brain is sending a command to your arm to hit the ball. But the visual signals are delayed. At the time you hit the ball, the vision of the ball won't enter your brain for another fraction of a second, so there is no point in looking at the ball. You can look all you want, but your arm already has moved.

"This helps the brain keep a very high resolution of space to make the stroke more accurate," he continues. "It's not about seeing the ball, because by then it's too late. It's about moving the eyes with the ball so that the stroke is more accurate. And the brain orchestrates this complicated pattern of behavior."

Visual signals always are delayed. They enter the brain, converted into a movement, and then leave the brain for the arm muscles. "It's a loop that takes about 200 millisecond--about one-fifth of second--and in that time the ball is moved," he says.

Pesaran is conducting his research under an NSF Faculty Early Career Development (CAREER) award, which he received in 2010. The award supports junior faculty who exemplify the role of teacher-scholar through outstanding research, excellent education and the integration of education and research within the context of the mission of their organization.

To prove his hypothesis that two regions in the brain (the parietal reach region and the parietal eye field, both in the parietal cortex) must talk to each other to prompt movement, Pesaran and his team are recording the activity of neurons, brain cells that send electrical signals to each other called "spikes." They do so by placing micro-electrodes into the brains of animals that look and reach, much like humans, and study the correlation and patterns in those signals.

"We think we can measure these signals when they are leaving one area, and coming into another," he says. "How does this show that this reflects communication between those two areas? Because something happens, something changes. We set up these movements in a particular way that requires communication between the eye and the arm centers, and we then made measurements in the brain from those centers. Then we linked the changes in the activity between the two areas to the changes in how the eyes and arm move."

As part of the grant's educational component, Pesaran is trying to show youngsters how far neuroscience has come, and encourage them to learn about it. He and his colleagues are working with middle-school children in Brooklyn, and have presented demonstrations at the American Museum of Natural History about the field of brain science.

"We go into schools and teach children about what we know about the brain," he says. "We had a brain computer interface, where they had the chance to control the cursor on the screen with their minds. We placed an EEG sensor on their heads, which measures brain activity. When they concentrate, it changes the position of the ball, and moves it up or down."

School children typically are unaware of neuroscience as an emerging field "that involves medicine, biology, engineering, a whole range of disciplines that come together," he says. "Increasing their sophistication and tools in this discipline early will be a hallmark of the next generation of brain scientists."