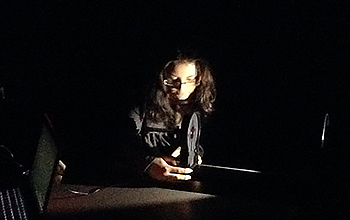 She recalls her mother lying alongside her, telling her to look out her window into the night sky because her guardian angel was there. And as she searched for this elusive guardian angel, what she found instead was the moon and stars, among other astronomical delights.

Despite Washington, D.C., metro-area light pollution that can restrict one's view of the cosmos, Bastien pinpoints that moment as the one when she got hooked on astronomy, knowing it held her future, if not an actual guardian angel.

Many astronomers and astrophysicists speak of that same source of inspiration. But, while our solar system's immensity and beauty have an almost universal appeal, the astronomy and astrophysics career field has had very little representation from minority populations.

In a study done by the American Astronomical Society, which includes most professionals and many students in these fields, only 21 percent of its members are female, which is light-years ahead of the representation of African Americans and Hispanics/Latinos--1 percent and 3 percent, respectively.

Not surprisingly, those numbers have prompted a call for diversity within the astro community.

In 2008, the National Science Foundation (NSF) started a program called Partnerships in Astronomy and Astrophysics Research and Education (PAARE, pronounced "pair"). Its goal was to identify and explore ways to repair "leaks" in the astronomy/astrophysics career pipeline for minority students. In many cases, minority students would start out studying astronomy, but they weren't making it all the way through the pipeline to pursue science careers.

When Bastien finished her undergraduate degree at the University of Maryland, she too wasn't sure whether she was appropriately prepared for the rigors of a grad school education in astronomy.

"I was petrified of grad school," she said. "I hadn't taken advantage of research opportunities as an undergrad largely due to personal challenges. But also because our department was so big, I fell between the cracks there."

PAARE aimed to make the face of astronomy more inclusive by seeing that minority students like Bastien got the right mix of resources, mentoring and encouragement. The partnership found that this required a multi-faceted approach that could target those pipeline points where "leaks" were most likely and "pair" some strong astronomy programs with schools that have more diverse populations, providing mentoring and support.

In Bastien's case, the PAARE Fisk-Vanderbilt Masters-to-Ph.D. Bridge Program proved to be one where she not only got her Ph.D., but had the opportunity to analyze stellar variability data, which led to a paper in Nature, being named a Hubble fellow and to her current postdoctoral work at Penn State University.

"We currently fund several highly complementary PAARE partnerships, which attack the leaky pipeline at different stages," said Dan Evans, the NSF program director who manages PAARE funding for the Division of Astronomical Sciences. "We're deeply concerned about the underrepresentation of minority students in astronomy and are massively proud of the successes of the students and staff who have participated in PAARE. We are exposing students to cutting-edge research. We are providing important new opportunities. And mentoring is utterly critical."

Though the partnerships target different points in the pipeline, they all emphasize mentoring, access to research opportunities and resources early on. They also emphasize an infrastructure that can address both academic and personal issues that might hinder progress.

"Queens is the most diverse county in the country," said Tim Paglione, director of AstroCom NYC, a partnership between astronomers at the City Universities of New York (CUNY), the American Museum of Natural History and Columbia University. Of the current PAARE partnerships, this is the only one that focuses exclusively on undergraduate students, targeting freshmen and sophomores. It also has the added challenge of CUNY being located throughout New York City, creating unique transportation issues that can deter students who feel inadequately prepared or supported.

"The problem is gigantic, but our astronomy field is also small," Paglione said. "That means even with our little program, we can have an impact. If we graduated two students each year from underrepresented groups who then went onto graduate school, we would be one of the leading programs in the country."

Keivan Stassun started a PAARE-like partnership even before PAARE existed, using funding from his NSF CAREER (Faculty Early Career Development program) award in 2003 to develop the Fisk-Vanderbilt program, which focused on the potential pipeline leak at this juncture.

"That CAREER award gave me seed funding to do things like develop a website and recruit a couple of students as research assistants," Stassun said. "The CAREER grant got the whole thing going, both in terms of cash and caché as I got buy-in from both universities."

Broader than just astronomy, Stassun' s program has admitted 78 students in physics, biology, chemistry, materials science and astronomy, with the belief that they can impact these STEM disciplines as well. "This felt like the perfect program for me," Bastien recalled. "The extra encouragement helped. I was immediately working on real science--on rare eruptive young stars--because they serendipitously had these data they needed analyzed."

Another potential leak in this pipeline comes right after college, and South Carolina State University (SCSU) partnered with the NSF-funded National Optical Astronomy Observatory and Clemson University to address the loss of minority astronomy students at this stage of their education.

"We hoped to mirror Keivan's success at Vanderbilt," said Don Walter, who started the Partnership in Observational and Computational Astronomy, based on an undergraduate physics curriculum at SCSU. "We overestimated the number of students we'd get involved, so we haven't yet seen the numbers at the grad program that we hoped for, but the momentum is there, and we believe we have the right supports in place."

The SCSU partnership admittedly has had different obstacles and issues. It doesn't have full-time researchers because SCSU is a predominantly undergraduate school. The astrophysics portion of the curriculum is a concentration, not a degree. And the STEM graduate programs are a few hours away at Clemson, not nearby.

"We try to spend a lot of time with our students as soon as possible. Because they don't take their first physics courses until their second year, it would be easy for them to get lost," Walter said. "I'll ask them to come by to make sure we connect early on--even waiting outside their classrooms if my emails don't bring them in. Students need early interaction."

This is a common theme throughout PAARE partnerships. Interaction with other students at the same and more advanced levels, as well as faculty, seems critical to success.

"We've added a number of mentoring layers," Stassun said about the Fisk-Vanderbilt program. "We assign to all incoming students a pair of peer mentors known as 'bridge buddies' who are students just one year ahead, and another mentor who is a few years further ahead. That way, they can see their future in front of them. We now also have a postdocs association, where the postdocs spend three-quarters of their time on their own research, but also a quarter of their time mentoring. They hold office hours, so students can talk to them, which offers a different perspective from faculty advisers."

At SCSU, one of the biggest challenges actually has been personal and financial problems that interfere with students staying in school.

"Some good students have had major personal or family issues," he said. "Money is tight, and many students find it too difficult to balance school life with demands in their personal lives. One female student in our physics program was an A-B student, but in the middle of the semester, her parents asked her to return home to care for a sick brother. She would have been a good undergraduate student and good graduate student."

Interestingly enough, the admissions process for these PAARE partnerships has gone beyond evaluating just grades and test scores.

Stassun referred to a Nature article that he published this year with colleague Casey Miller about the Graduate Record Examination, or GRE, gender and ethnic bias that was discovered using published data from the Educational Testing Service that makes those tests. Their study found that women score approximately 80 points lower than men on the test's math section, and African Americans, approximately 200 points lower than Whites and Asians, on average.

For that reason, Stassun and his team put together a different set of metrics to measure something he refers to as "grit" or performance character.

"We found that the most successful students weren't necessarily the ones with the highest test scores," he said. "Graduate school is about persistence, so it makes sense to try and determine a candidate's capacity for being persistent. Consequently, we have achieved a very large, diverse program with a 90-percent Ph.D. persistence rate versus the national rate which is barely better than 50 percent." In other words, 90 percent of the students at Fisk-Vanderbilt are getting their doctoral degrees. He credits that success to careful, yet diverse selection and smart mentoring.

"PAARE funding makes a difference," Walter said. "In the August American Institute of Physics newsletter, SCSU was tied for eighth position nationally in terms of African American physics bachelors of science degree graduates during the five-year period, from 2008-2012. We'd only graduated 12, but because the pool is so small, we're one of the top schools. PAARE helped us provide our students with meaningful internships at places like the National Optical Astronomy Observatory, which keeps their interest alive while giving them important experience."

Ariel Diaz, who attends the CUNY program, is a PAARE student who has benefitted from those experiences and demonstrated his "grit." A former Marine, he lives in New York City with his ailing father, whom he cares for. His astronomy interest was piqued in an introductory class that was far from the "easy A" he thought it would be. However, he found he really enjoyed the class, and Paglione's team recognized a student who had the wherewithal to succeed. Today, Diaz sifts through X-ray data from Chandra Observatory, looking for signals that could indicate black holes or other astronomical events.

"He's grown as a student. He's building a vision of himself in this career," Paglione said. "And honestly, that's what we want to do here. We want our students to see that future in themselves."

Related Awards
#0750814 A Partnership in Observational and Computational Astronomy
#1358862 Graduate Opportunities at Fisk in Astronomy and Astrophysics Research (GO-FAAR)
#1153335 AstroCom NYC: A Partnership between Astronomers at CUNY, AMNH, and Columbia University