Ten things to know about the flowers of fall: Sunflowers 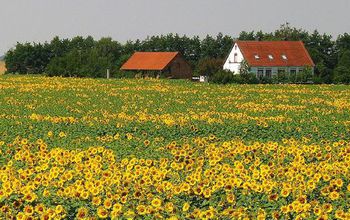 As fall fields turn bright with color, what might we learn from roadside rows of sunflowers--and the sunflower seeds widely used to feed birds in colder weather?

Scientists are finding that answers to biological and environmental questions large and small may be hidden in the petals of common sunflowers.

For example, how frequently and under what conditions does evolution take the same path? When independent populations evolve the same characteristics, are the underlying genetic changes similar or different?

To peer into the world of speciation--how one species branches into another--the National Science Foundation (NSF) spoke with George Gilchrist, a program director in the agency's Division of Environmental Biology and with Ken Whitney, a plant biologist at the University of New Mexico who studies populations of experimental sunflowers in Texas.

With funding from NSF, Whitney and botanist Loren Rieseberg of Indiana University Bloomington and the University of British Columbia are learning whether sunflowers are converging or diverging in their traits.

1) Why do scientists study sunflowers?

Whitney (KW): Sunflowers represent a "recent" success story. In the past three million years, this group has diverged (or branched into new species) in some 50 species in North America. Sunflowers live in a variety of habitats, from forests to deserts to salt marshes.

Sunflowers also contain examples of many important processes, including the evolution of both annual and perennial lifestyles, hybridization (mating between species) and the phenomena of polyploidy (the doubling of chromosome sets in a lineage). All this combines in an "evolutionary cauldron."

2) Where did sunflowers originate?

(KW): The genus Helianthus, true sunflowers, is native to North America. The common sunflower, H. annuus, and its seeds are one of only three crops that were domesticated north of Mexico. The second, sumpweed, was a favorite of Native Americans, but is no longer in use; the third, Jerusalem artichoke, is actually the root of another sunflower species, H. tuberosus.

3) What are the major commercial uses of sunflowers?

(KW): Oilseed sunflower varieties are used to produce oil used in cooking. A separate set of varieties, called confectionary varieties, has been developed to produce the large seeds we eat directly--such as those that are roasted and salted.

4) How do sunflowers link North America and Russia?

(KW): Although the crop sunflower originated in North America, it had to travel to Europe to achieve its current form. Much of the breeding for large seed size and high oil content was done in Russia in the 1800s, a legacy that is still with us in the sunflower variety called "Russian Mammoth." Many of us grow this plant in home gardens.

Sunflower varieties from Russia made it back to the U.S. in the late 1880s, but it was not until the 1930s and 1940s that crop sunflowers were grown on a large commercial scale in the United States.

5) What's the difference between wild sunflowers and those that are domesticated and grown as crops?

(KW): Both wild and crop sunflowers are the same species, H. annuus. Wild sunflowers have many flowering heads on each plant, and have small seeds. A major event in the domestication of the sunflower was the creation of a "monocephalic" plant with a single large flowering head and large seeds.

6) How much diversity is there in wild sunflowers?

(KW): Sunflowers live in a wide range of habitats, and are widespread across the North American continent. That geographic range means that sunflowers have adapted to very different environmental conditions during the course of their radiation.

8) Are there medical treatments derived from sunflower products?

(KW): Sunflower products, especially the oil from the seeds, have long been used in folk medicine, but I'm not aware of any uses in modern medicine.

9) Do wild sunflowers hybridize? What role has hybridization played in speciation?

(KW): Sunflowers are notorious for hybridizing: mating across species boundaries and exchanging genetic material between species. Sometimes this genetic exchange leads to improved performance, for example in the Texas sunflower our team has been studying.

We have evidence that when wild H. annuus captured genes from another species, H. debilis, it was able to expand its range southward and become a new subspecies, H. annuus texanus. In other sunflowers, hybridization may lead to entirely new species. The sunflowers H. annuus and H. petiolaris have hybridized repeatedly and have produced three new sunflower species that live on the desert floor, on sand dunes, and in salt marshes.

Gilchrist (GG): This research has been critical to understanding how hybridization can lead to rapid speciation. While many hybrids are sterile, some genetic changes create hybrids with extra sets of chromosomes that are fully fertile, but reproductively isolated from their parents.

These new hybrid sunflowers often are uniquely adapted to new habitats that neither of the parent species occupies. Speciation by hybridization is very common in plants and may play a major role in plant diversification.

10) Do insects and pathogens attack sunflowers?

(KW): Sunflowers are indeed attacked by insects, especially grasshoppers, caterpillars, aphids and their relatives, as well as by fungal and bacterial pathogens.

A sunflower's life, scientists say, is no bed of roses.