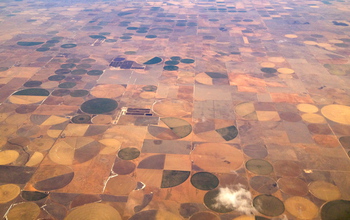 In this image, researchers study cropping patterns over north Texas.

Trying to sell or buy water rights can be a complicated exercise. First, it takes time and effort for buyers and sellers to find each other, a process that often relies on word-of-mouth, local bulletin boards, even calling friends and neighbors to get the word out. Then they must deal with the maze of rules and regulations involved. Finally, they must reach a fair price.

It would be much easier if a computer could do it. Now, one can.

Scientists at the University of Nebraska and the University of Illinois at Urbana-Champaign have developed an algorithm that can match potential buyers and sellers, sift through the complexity of local physical and regulatory systems, and reach a fair deal designed especially for them. It also allows the negotiating parties to provide information confidentially during the process.

"It's a different way of matching buyers and sellers in places where there aren't established markets," says Nicholas Brozovic, director of policy at the Robert B. Daugherty Water for Food Institute and associate professor of agricultural economics at the University of Nebraska. "It's a different way of building a market for potential buyers and sellers of natural resources. It maintains confidentiality and it is structured in a way that is neutral and fair."

The National Science Foundation (NSF)-funded Brozovic's research focuses on using economic analysis to understand natural resource systems, with a special emphasis on water resources. He designs and evaluates management policies that can maintain or improve the condition of natural resources. Much involves collaborations with engineers, urban planners and others.

Mammoth Trading, a new company that grew out of his research, hopes to provide a neutral centralized place for both buyers and sellers interesting in trading water rights and other resource use rights. The goal is to craft each transaction by taking local community needs into account, as well as factors unique to the individuals involved.

There is a transaction fee associated with the market and any benefits from trading are split between buyer and seller, "which is not typically how brokerage works," Brozovic says. But "we view ours as a fairer system."

The company currently is developing a certified irrigated acreage market for groundwater rights in the Twin Platte Natural Resources District in Nebraska, as well as working on developing other systems, mostly in water quantity and quality, as well as other natural resources.

"Before we started, it was really difficult to identify those interested in buying or selling their rights," says Richael Young, company president, and an expert in environmental engineering and agricultural economics. "We provide a central hub for people. Right now, they spend a lot of time either calling up people, seeing if someone is interested in trading, or hiring a realtor, which can take months, and still may not tell you whether or not a person is eligible to trade."

Although the company is just getting started, the researchers see a future where the system will expand to other areas and natural resources.

"Part of our thinking is how we can scale this idea and broaden this scope to other environmental markets," Brozovic says. "Beyond this relatively narrow market of trading groundwater rights, there are many other natural resources that have the same features where a similar system could work, such as habitat markets or wetland mitigation markets, storm water management in urban areas, water quality in waste water treatment plants.

"There is a broader move within environmental regulations to move to market based systems," he adds. "If done correctly, it may be a cheaper way to achieve a better environmental outcome."

However, there can be considerable complexity in implementing environmental and resource use regulations using markets.

"For carbon, it's a pretty simple process, since the atmosphere is well mixed so it doesn't matter where carbon emissions occur," Young says. "But when you think about ground or surface water, those are highly localized resources. You can't have a trading scheme that allows people to trade wherever they are located, since there are physical laws that govern the movement of groundwater and surface water.

"So those are the kinds of rules we incorporate into the system to allow people to trade more effectively," she adds. "Our goal is to help businesses operate more efficiently within existing regulations. For now, we are focusing on groundwater. In the future, we hope to enter into markets for surface water and air pollutants."

One incentive for expansion to other areas is the fact that the market for trading groundwater permits is highly seasonal. "Once you've planted your seeds and made those decisions, you may not be interested in trading for more water rights," Young says.

NSF has supported their efforts with a $50,000 Innovation Corps (I-Corps) grant, awarded in 2013, which provides a set of activities and programs that prepare scientists and engineers to extend their focus beyond the laboratory into the commercial world.

Mammoth Trading recently completed its first deal, and is working on others. "We expected it would take time for people to become familiar with our system, and how it works," Young says. "It surprised us how quickly people did hear about us. We got some trades earlier than expected, and we were able to get them through."

Brozovic agrees. "We now have the first trades in our system, which is exciting," he says. "Eventually we could do this nationwide, and potentially internationally."