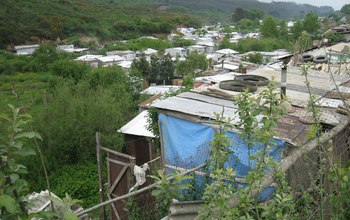 Scientists are studying leptospirosis in the Los Rios region of south-central Chile.

All are names for the same disease, leptospirosis, an infection caused by corkscrew-shaped bacteria called Leptospira.

Symptoms range from mild--headaches, muscle aches, fever--to more severe conditions, such as meningitis and bleeding from the lungs.

"Leptospira bacteria are maintained through a complex transmission cycle," write scientist Claudia Munoz-Zanzi of the University of Minnesota and colleagues in a 2014 paper in the American Journal of Tropical Medicine.

"Humans and other mammals, domestic and wild, become infected after contact with urine from an infected host, or Leptospira-contaminated water or damp soil."

Some 7 to 10 million people contract leptospirosis each year. The disease is most prevalent in tropical areas, but may be found almost anywhere that's warm and wet.

In the developed world, leptospirosis occurs in people involved in outdoor activities, such as canoeing and kayaking in warm places. In developing countries, the disease largely happens to farmers and poorer people who live in cities.

Infection with Leptospira is linked with agricultural practices, fouling of household or recreational water, poor housing and waste disposal, and changes in the density or proximity of infected animals such as rodents, domestic animals like dogs and wildlife.

Rodents are the most common reservoirs of Leptospira, says Munoz-Zanzi.

With a grant from the National Science Foundation (NSF)-National Institutes of Health-U.S. Department of Agriculture Ecology and Evolution of Infectious Diseases (EEID) program, Munoz-Zanzi is studying the eco-epidemiology of leptospirosis.

Awards through the EEID program fund scientists to study how large-scale environmental events--such as habitat destruction and climate variability--alter the risks of viral, parasitic and bacterial diseases.

Munoz-Zanzi's goal is to improve knowledge of the social, epidemiological and ecological factors influencing leptospirosis in South America. She and colleagues are working to identify intervention strategies to reduce the disease's effect on the health of humans and other animals.

The study is taking place in the Los Rios region of south-central Chile. The area's climate is moderate, with an economy that's based on farming, agriculture, forestry and tourism.

Most of the region's human population is concentrated in a few urban centers, with the rest scattered in small towns or villages and farm areas.

Initial findings from the research showed that 20 percent of leptospirosis starts with rodents, including rats and mice, inside households and in other environments in populated areas.

Leptospira-carrying rodents turned out to be more abundant in rural villages than slums and farms.

"Social factors can be important causes of diseases," says Sam Scheiner, NSF EEID program director. "This study shows that the type of community can determine the presence of rats and mice that are disease-carriers. The results have implications for the control of many infectious diseases."

Danger in a puddle

"Because Leptospira live in water and soil," Munoz-Zanzi says, "the environment plays a key role in transmission in household pets, farm animals and people."

When the scientists collected water from puddles, containers, animal troughs, rivers, canals and drinking water, all showed contamination with Leptospira.

In households where puddles were found along with signs of rodent infestations, leptospirosis was common.

"However," says Munoz-Zanzi, "that was true only in lower income houses."

Some 19 percent of samples from these households--most from locations with warmer temperatures, and many with dogs as pets--tested positive.

The scientists are now examining leptospirosis in dogs and livestock, as well as in humans. They're integrating molecular, epidemiological and other data to gain insights into patterns of infection in various community types.

"The more we understand about this disease," says Munoz-Zanzi, "the more we realize the importance of the local community setting."

Ongoing efforts, she says, include the use of mathematical models to develop recommendations for disease control that's locally relevant. The scientists hope to provide people living in the most affected areas with tools to decrease the effects of leptospirosis.

In the meantime, how can people avoid contracting the disease?

"Wear protective equipment to prevent contact with potentially infected animals and environments," says Munoz-Zanzi, "wash after any such contact, and reduce rodents in places where people live and work."

Crowded tropical conditions where rats and mice freely run from house to house may herald another unwanted guest: Leptospira.