Mission impossible? New England's snowstorm 'bomb' from inside a Doppler-on-Wheels

Trapped in gale-force winds for 24 hours, scientists got the data 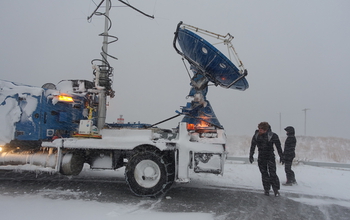 Jan. 26, 2015. The day computer models forecast one of the most intense snowstorms in history. Meteorologists call it a "bomb."

The bomb would hit coastal New England that afternoon. And night. And the next morning. Eventually it blitzed the region with more than 3 feet of snow.

Blizzard warnings were issued from New Jersey to Maine. Cities in the path of the storm ground to a halt.

In the first driving snows, a Doppler-on-Wheels (DOW) mobile radar--a truck with a swiveling radar dish mounted on its back like a huge eye--made its way through Massachusetts.

"The journey was supposed to be a run-of-the-mill deployment," says Josh Wurman, a scientist at the Center for Severe Weather Research (CSWR) in Boulder, Colo. The DOW was headed to Vermont's Lyndon State College. There it would be part of a radar meteorology class.

Or so the researchers thought.

Turning into the storm

Then they veered farther northeast into the teeth of the snowstorm. "The mission into a coastal blizzard was the first for a DOW," Wurman says.

Arriving just hours before blizzard conditions, the crew braved snarled traffic as Boston shut down before the storm.

"We were looking for fine-scale observations of this rare storm," Wurman says. He and colleague Karen Kosiba of CSWR deployed the DOW in one of the most intense weather areas: on Scusset Beach in Sandwich, Mass.

The National Science Foundation (NSF) DOWs, a fleet of three mobile radars, are easily moved from place to place. The "little trucks that could" have pioneered studies of tornadoes, hurricanes, lake-effect snowstorms and other short-lived, high-impact weather systems.

"The deployment of a Doppler-on-Wheels during one of New England's largest snowstorms in recent history offered an opportunity to study the details of storm development and evolution," says Linnea Avallone, a program director in NSF's Division of Atmospheric and Geospace Sciences, which funds the DOWs.

"The data gathered are likely to provide insights into the intensity and type of precipitation in these storms," says Avallone, "and to improve the ability to predict snowfall amounts."

The goals of the blizzard mission were to track small-scale atmospheric structures such as miso-vortices, or very small circulations embedded in snowbands, and document where mixed-phase precipitation (snow, rain, super-cooled rain and sleet all at once) hits the ground and how it begins aloft.

Among the questions scientists are asking is: Are miso-vortices also present in snowbands in "ocean effect" East Coast storms?

A first look at last month's snowstorm data suggests the answer is no, says Wurman, "but there are terabytes of data to review yet."

Blizzard on a beach

The DOW was parked on a northeastward-facing beach, bearing the full brunt of the storm.

There, a weather pod loaded with instruments measured gusts up to 64 miles per hour, while another piece of equipment, called a mast, measured winds at 77 miles per hour.

The streaks may play a role in increasing the mixing of heat from the ocean into rapidly intensifying snowstorms such as January's "bomb."

"These storms are known for cold air at the surface and warm air aloft," says Wurman. "But a preliminary look at the DOW data shows a more complex picture, with several layers of winds separated by strong wind shear, each layer perhaps containing different phases or mixes of precipitation."

The scientists believe the ultra-fine-resolution data they collected will reveal details of how coastal snowstorms work. Analysis of the data, they say, will increase the ability to forecast snow amounts from such weather events.

The way won't have been easy, however.

Snow and spray hit the DOW at 70 miles per hour. High winds made deploying weather pods and other equipment "just miserable," Wurman says.

The crew was confined to the DOW's small cabin for more than 24 hours with no plumbing and only boxed food.

After 24 hours on the beach, and with a supply of beef jerky and goldfish crackers completely consumed, "the DOW crew was more than ready to go," says Wurman.

But the mission wasn't over yet. Four-feet-high snowdrifts blocked the beach access road.

Then the DOW took on a new role: bulldozer. "We maneuvered forward and backward," says Kosiba, "pushing snow out of the way inches by inches."

"Regular" snowplows eventually managed to clear a path in, offering the DOW an open route--into its next eye-of-a-storm.