The Beauty and Joy of Computing in the Big Apple 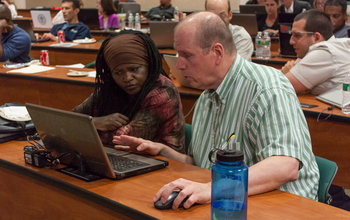 CS teachers attend a workshop on the Beauty and Joy of Computing at Kean University in July 2014.

"The real transformative and empowering experience comes when one learns how to program the computer, to translate ideas into code," according to Brian Harvey, a senior lecturer in computer science at the University of California (UC), Berkeley.

Through the efforts of Code.org and the news that President Obama wrote his first line of code, computer science education has recently moved into the public consciousness in a major way. In much of the resulting publicity, the motivation to broaden learning in the field focused on jobs and national security, but in reality the issues are much broader.

"There is a fight to get people to understand the importance of computer science education," said Harvey. "Computing has given us a new way of understanding the world, one that has strongly influenced physics, biology, economics, mathematics, psychology and the arts. Even someone who isn't going to be a professional computer programmer should know something about computer science for the same reason that every educated person should know something about physics."

Harvey is co-lead of a team from UC Berkeley that, with support from the National Science Foundation, is embarking on a four-year project with the New York City Department of Education and Education Development Center, Inc. (EDC) to create new computer science curricular materials and to train 100 computer science teachers.

The course they are training teachers to teach is aligned with the recently announced Advanced Placement Computer Science Principles course for high school students. Called "The Beauty and Joy of Computing," students learn about the history of computing and discuss the future of computing.

The course includes an introduction to fundamental computing concepts, such as abstraction, design and algorithm development as well as the social implications of computers. It is based on a course Harvey and his collaborator, Dan Garcia, developed as a first year college course at UC Berkeley.

"We started by rethinking our programming-only non-majors course to include powerful non-programming big ideas and guest lectures, while incorporating techniques that would broaden participation, like active learning and pair programming," Harvey said. "Only later did we ensure that our course satisfied the AP framework too, and it was surprisingly little to change!"

According to Harvey, Computer Science Principles differs from traditional introductory courses by emphasizing inclusion, diversity and technology's connection to society. The "Beauty and Joy of Computing" is one of several Computer Science Principles curricula, differing from others in the extent to which advanced programming techniques are included.

Though many students have negative stereotypes about computer science, "everyone loves computers because they love their cell phones, video games, etc." said Harvey. "We want them to make the connection between the programming and what they love."

The computer science teacher training effort in New York City is a collaboration between the UC Berkeley, New York City Department of Education, EDC and the New York Foundation for Computer Science Education.

The project consists of two parallel efforts. The first brings the "Beauty and Joy of Computing" to the New York City school system, training 100 public high school teachers to teach it.

The second part of the project, and the piece that excites Harvey the most, involves teaming up with the professional curriculum developers at EDC to tailor the curriculum for a high school audience and provide the materials that teachers have said were missing in previous teacher training. These include a scope and sequence document that describes what the course covers, and a teachers' manual. Together, the two efforts will result in a curriculum that high school teachers can use to teach computer science effectively to a diverse student population.

Harvey notes that CSNYC--a non-profit organization with a mission to ensure that all children in New York City public schools have access to computer science education--was instrumental in bringing the program to New York City and will play a pivotal role throughout the duration of the project.

"CSNYC has an important focus on supporting teachers throughout the year with meet-ups and talks and CS related activities. That is the role that they will play with our teachers as well," said Harvey.

The project kicked off in January with curriculum development efforts, and the first training classes will be held during the summer of 2015. Also in January, the New York Department of Education began recruiting teachers for the first round of summer professional development.

Harvey anticipates that over time there will be fewer academics leading the trainings and more of the first cohort leading the next cohort of computer science teachers.

"In New York, we will be able to see if we can teach this material to a diverse set of urban kids, which is the make or break thing for us," he said. "It will be interesting to have some real data across many different classrooms, not just the self-selected early adopter teachers we've worked with until now."