Hibernation season over, will disease-ridden bats emerge from caves and mines this spring? 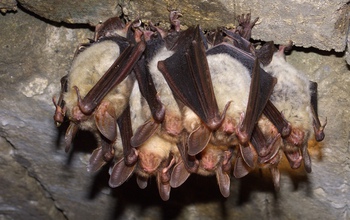 Hibernacula, they're called: Places where species like bats hibernate.

Bats by the thousands congregate in such caves and mine shafts, spending their winters away from the elements.

Now they're anything but safe.

Their promixity to one another, along with the caves' and mines' natural humidity, has fueled the outbreak of one of the worst bat diseases in history: White Nose Syndrome (WNS).

First diagnosed in bats in a cave near Albany, N.Y., in 2006, WNS spread from bat to bat, colony to colony, across the northeastern United States.

The disease is caused by the fungus Pseudogymnoascus destructans, which results in a skin infection, a distinctive white growth around the muzzles and on the wings of bats. WNS spreads as bats hibernate in winter.

As of 2012, the disease was linked to some 6.7 million North American bat deaths.

The fungus was likely carried to the United States by humans traveling to and from Europe, scientists believe.

WNS and the skin lesions it causes are widespread in European bats. In Europe's bats, however, no mass mortality has been documented. Why? Researchers are working to find answers.

Back across the pond: From Vermont to Virginia and beyond

In the United States, WNS has been present for several years in Vermont, New York, Pennsylvania, Maryland, Virginia and West Virginia, says biologist Winifred Frick of the University of California, Santa Cruz.

She and colleagues recently published a paper in the journal Global Ecology and Biogeography that details the disease in 468 bat colonies in these six states.

The scientists compared the results with those from 640 colonies in eight European countries: Norway, the United Kingdom, the Netherlands, Belgium, France, Portugal, the Czech Republic and Bulgaria.

WNS infections have been confirmed in all these nations but for Norway, where no surveys have yet been conducted.

"We used four decades of population counts in 16 species of hibernating bats," says Frick, "to determine the effect of WNS on bats in North America compared to those in Europe."

Most affected, perhaps, is the northern long-eared bat, Myotis septentrionalis. The species is being considered for listing under the U.S. Endangered Species Act. Northern long-eared bats have vanished from some 69 percent of the hibernacula where they were once found.

"Mortality from WNS has placed this bat species in peril," says Frick. "It now appears at significant risk of extinction."

Into the field...or the cave

There scientists count numbers of bats in each species. For the past few decades, such winter censuses have taken place every year or every other year in countries in Europe and North America, says Frick.

In the recent study, she and co-authors focused on bats in the family Vespertilionidae, which has members on both the European and North American continents.

"North America and Europe don't share any of the same bat species," she says, "so we compared bats related at the family level."

The researchers found that declines in U.S. bat populations have resulted in colonies in North America and Europe that are roughly the same size.

"The finding raises the intriguing question of whether hibernating bat colonies in Europe used to be larger prior to the presence of WNS," says Frick. "It hints that disease may be an important hidden force behind basic ecological patterns in bats and other species across continents."

"This study provides important insights into how a devastating disease has affected bats in the U.S.," he says. "Such information is essential for developing management plans to help save these species."

The EEID program supports efforts to understand the ecological and biological mechanisms behind human-induced environmental changes and the emergence and transmission of infectious diseases.

The benefits of research on the ecology and evolution of infectious diseases, says Scheiner, include development of theories about how diseases are transmitted, increased capacity to forecast disease outbreaks, and knowledge of how infectious diseases emerge and re-emerge.

Disease is increasingly recognized as a serious threat to wildlife species, "especially as human travel increases the chance that we could accidentally introduce pathogens [disease-causing microbes] to new parts of the planet," says Frick.

Measuring how infectious diseases may change fundamental ecological patterns is essential for determining effects of these diseases on wildlife species.

"Our study offers the first evidence that disease can change macroecological patterns across continents," says Frick. Macroecology is the study of broad-scale patterns of species distributions and abundance.

Many bats are insect predators. As such, researchers report, they provide valuable "ecosystem services" for humans. Increases in insects like gypsy moths and cutworms--favorite bat meals--have economic consequences.

Cutworms, for example, are destructive garden pests that cause fatal damage to vegetables, fruits and flowers. Until bats swoop to the rescue.

It's late March and winter hibernacula are opening, their bats beginning to emerge. Without bats, scientists say, the landscape of spring would be a far more insect-ridden, crop-damaged place.