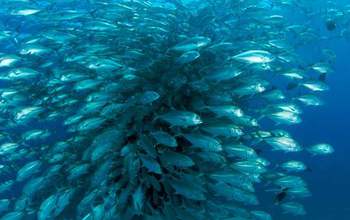 The waters surrounding Baja California Sur are teeming with fish. They're also favorite locales for fishers in pursuit of a living.

But like cross-currents in the ocean, the needs of humans and fish meet--and often clash--in this deep blue sea.

In results published this week in the journal Proceedings of the National Academy of Sciences (PNAS), scientists assessed marine sustainability in the Baja California Sur region by applying a framework that accounts for both ecological and human dimensions of environmental stewardship.

The resulting maps, the researchers say, are mosaics of regional sustainability outlooks with the potential to guide environmental policy.

The maps, according to lead PNAS paper author Heather Leslie of Brown University in Providence, R.I., show regional strengths and weaknesses that can help guide fishers, conservationists and other decision-makers as they consider steps to preserve the peninsula's coastal marine ecosystems.

"This framework enabled us to integrate many different types of data related to coupled human-environment systems," says Leslie.

"We were able to be more comprehensive in our analysis than we would have otherwise--for example, if we had focused solely on the data closest to our individual disciplines."

Leslie and the team--which included anthropologists, economists, ecologists, fisheries scientists, geographers and other social scientists--gathered data on 13 ecological and social variables for each of 12 regions around Baja California Sur.

They developed a profile of sustainability potential for each region in four "dimensions": social governance systems and actors, and ecological resource units and resource systems.

What became clear, says Leslie, is that each region's profile is different, suggesting that the most effective policies to achieve sustainability will be those tailored to shore up each area's weaknesses without undermining its strengths.

"More than 1 billion people worldwide rely on fish and other seafood as their primary source of nutrition, yet coastal resources are often poorly understood and at risk of long-term decline," says Sarah Ruth, a program director for the National Science Foundation's (NSF) Dynamics of Coupled Natural and Human Systems (CNH) Program, which funded the research.

"Fisheries involve people and coastal ecosystems interacting with one another in myriad ways," says Ruth. "This work increases our understanding of these complex systems, and ultimately will help us manage marine resources in a more sustainable way."

Magdalena Bay and Todos Santos: A tale of two regions

Take, for example, stories the researchers' maps illustrate about the Pacific coast regions of Magadalena Bay and Todos Santos. If Baja California Sur is a leg, then Magdalena Bay would be the knee and Todos Santos the front of the ankle.

In Magdalena Bay, fisheries are diverse and productive. But the area is also crowded with fishers who use different kinds of gear and don't necessarily all follow the same locally developed rules, Leslie says.

While the ecological foundation there for sustainability looks good, the social dimensions are considerably less promising, the scientists found.

"Depending on which type of data one musters regarding the potential for sustainable fisheries, Magdalena Bay could be scored as either well-endowed or quite weak," write the paper authors, which also include Xavier Basurto of Duke University and Octavio Aburto-Ooropeza of the University of California, San Diego.

In Todos Santos, local-scale fisheries institutions are strong. There is cooperation and compliance among fishers, based on the social science surveys the researchers conducted.

But the nearshore ocean is less productive and yields fewer fish species than Magdalena Bay, just 150 miles to the north.

While not far geographically, the regions are opposites in their social and ecological profiles, says Leslie.

Are there fundamental trade-offs?

The diversity of regional strengths and weaknesses shown in the maps is borne out statistically.

The researchers looked for correlations among the four dimensions across Baja California Sur, but found few.

"Does something like this represent fundamental trade-offs?" Leslie asks. "What we found suggests that it does. There's nowhere that does well in every dimension."