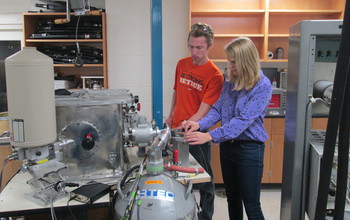 For decades, a particular class of toxic chemicals was added to everything from clothing to carpeting to fire-fighting foams to make them stain- or water-resistant or nonstick--until scientists discovered the compounds were toxic.

Since learning of their hazardous nature, U.S. companies have largely stopped using the compounds. But how can we be sure that the raw materials those companies obtain, like the fabric for a shirt, aren't already tainted with them?

Peaslee, with support from the National Science Foundation, has devised and refined a new application of an existing nuclear physics technique to help companies detect these dangerous compounds.

And he's not keeping his idea to himself. He's reached out to other universities to find collaborators and aims to spread the technology into areas including environmental monitoring, food packaging, and even sports and outerwear manufacturing.

Chemical compounds with a strong carbon-fluorine bond, or perfluorinated compounds, were valued for their ability to help make everyday materials stain- or water-resistant or nonstick, including textiles and food packaging papers.

But industry was forced to re-evaluate its use of these compounds almost a decade ago, when scientists learned they were toxic, didn't break down in the environment and were bioaccumulative; that is, their concentration builds up in animal and human bodies over time, like the kinds of mercury found in some fish.

"Perfluorinated chemicals are entirely man-made," Peaslee said. "But thanks to their incredibly long environmental lifetimes--on the order of thousands of years--and their ability to bioaccumulate in the food chain, we are seeing these chemicals in the blood of relatively isolated top predators such as polar bears."

With voluntary agreements negotiated by the Environmental Protection Agency, U.S. companies enacted measures to eliminate some of these compounds from their products. However, making sure their materials were safe presented a detection challenge.

Manufacturers would have to subject samples of their supplies to "liquid chromatography tandem mass spectrometry," a process that breaks a sample apart, separating the neutral material into charged particles, and accelerates those individual parts through a magnetic field. The process is time-intensive and destroys the samples, leaving them unable to be tested multiple times. That's a problem. Without a rapid test method, it's difficult to screen large amounts of products or materials.

But Peaslee came up with a non-destructive, reproducible and relatively quick technique by applying a phenomenon called Particle Induced Gamma Emission, or PIGE, an analysis technique that physicists have used for decades, just not for this purpose.

Using a small particle accelerator, physicists hurtle charged particles (a beam of ions) toward a sample that may contain an element they want to find, such as lithium, beryllium, boron or fluorine. When one of the charged particles collides with a nucleus in that target sample, it transfers energy to that nucleus, exciting it. The nucleus wants to get rid of that excess energy and does so by emitting a gamma ray--a high-energy photon. Because of the unique nuclear structure of each element, the emitted gamma rays are telltale signatures, like fingerprints, that allow scientists to identify exactly which element or isotope is present.

"Ion beam analysis techniques such as PIGE provide a highly sensitive method for the detection of certain isotopes that can be used rapidly and non-destructively to identify which elements are present in any solid sample," Peaslee said.

Peaslee's application of PIGE looks for fluorine; finding it usually means a sample has been treated to contain some unwanted perfluorinated compound. Since the process excites the nuclei instead of destroying them, the sample can then be tested multiple times, unlike with mass spectrometry. He took the inspiration for his method from a lower energy technique called Particle Induced X-ray Emission, or PIXE, which has been the go-to method for testing aerosols since the 1980s.

Companies in need of sample analysis services have reached out to Peaslee--so much so that he's launched an entrepreneurial effort to handle the requests while still performing independent research with his undergraduate students in the lab.

Peaslee's goal is to spread the knowledge, and in the process, making consumer products as safe as possible. He has reached out to other universities that have the right equipment--specifically a small accelerator--to spread the word on PIGE perfluorinated compound detection and to find collaborators. His students are important for this effort, too.

"This novel application of a traditional nuclear physics technique allows our students to apply their training to exciting intersections of science and policy, such as consumer product testing or environmental remediation," Peaslee said.

Peaslee's lab is an important training ground for young scientists. Due to his specific research interests, he's teaching undergraduate students about not just nuclear physics but also environmental hazards, societal impacts of science and entrepreneurship. In fact, he has realized his research provides a unique approach in encouraging students to study nuclear physics.

"I have developed technical expertise by optimizing detection parameters, interpreting spectra and synthesizing chemical standards--overcoming obstacles as they arise," said David Lunderberg, a Hope College junior and student in Peaslee's lab. "However, to have the larger impact envisioned for this work, I must effectively convey the importance of PIGE to other labs as a tool to prevent human exposure to health hazards."

As Peaslee continues to move forward with his students in testing for perfluorinated compounds, he's hoping to improve upon his method. At the moment, it's hard to use this technique on water or blood to test for the presence of fluorine, unless the concentration is extremely high. Peaslee aims to enhance his technique to detect fluorine at environmentally relevant concentrations and have an even bigger impact on human health.

"My hope is that developing this applied nuclear physics technique can revolutionize the way we screen for perfluorinated compounds in the environment around us," Peaslee said. "Hopefully, that will lead to market forces that lead to a healthier environment for all of us."