Rabies could spread to Peru's coast by 2020

Male vampire bats the likely culprits in transmitting the virus 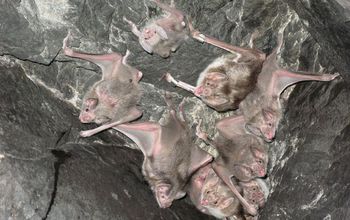 A colony of vampire bats. Scientists are discovering new links between vampire bats and rabies.

Rabies will likely reach the Pacific Coast of Peru -- where the virus currently does not occur -- within four years, according to a paper published this week in the journal Proceedings of the National Academy of Sciences.

Researchers reported that the zoonotic virus, which is moving at a rate of 10 miles per year, is likely being carried by infected male vampire bats, and could arrive at the Peruvian coast by June 2020. Additional analyses showed that male bats, which leave their colonies upon reaching maturity, are using Andes Mountain corridors to carry the virus westward.

"Understanding what controls the spread of disease is more important than ever," said Sam Scheiner, director of the National Science Foundation's (NSF) Ecology and Evolution of Infectious Diseases Program, which funded the research. "This study demonstrates that modern genetic tools can measure that spread. In the future, such tools will be important in controlling known diseases, such as bat rabies, and new diseases as they emerge."

The findings could help public health officials in Peru and neighboring countries prepare for and mitigate future rabies outbreaks, said ecologist Sonia Altizer of the University of Georgia, a co-author of the paper.

Rabies is a serious threat to public health and agriculture in Latin America, causing human fatalities and more than $30 million in livestock losses every year.

Vampire bats are responsible for the majority of rabies cases in humans and in livestock, largely because of their blood-feeding behavior.

Human and livestock deaths from rabies are on the rise, with rabies now appearing in what were previously virus-free areas. Current rabies control efforts, which focus on reducing the size of vampire bat populations, have proved ineffective.

Understanding how bat dispersal drives invasions of the virus is therefore critical for forecasting the virus's likely spread, and for developing strategies to stop it, scientists say.

Due to the logistical difficulty of tracking infected vampire bats in real-time, researchers sampled DNA from bats and from the rabies virus to explore historical patterns of the virus's spread.

Altizer and Daniel Streicker of the University of Glasgow analyzed the DNA in 264 samples of rabies virus obtained from infected livestock throughout Peru.

They found that the virus could be traced back to one of three common ancestors: two virus lineages that occurred east of the Andes, and a third virus lineage in the inter-Andean valleys to the south.

To analyze the DNA of vampire bats, the team took tissue samples from 468 bats. They then looked at two kinds of DNA: nuclear DNA, which is inherited from both parents, and mitochondrial DNA, inherited only from mothers.

Analyses of the maternally inherited DNA showed that most bat groups with a similar maternal lineage live exclusively in single geographic areas, suggesting that the females don't move among different areas.

The analyses of nuclear DNA told a different story, however.

The researchers found that bats with the same nuclear DNA signature were clustered into three geographic regions, and that the spatial distribution of these three DNA lineages was strikingly similar to the three genetic groups of the rabies virus.

"In a nutshell, this shows that male vampire bats are likely responsible for dispersing rabies across the landscape at the continent level," Altizer said.

By taking into account the collection dates of rabies virus samples, the researchers reconstructed the historical spread of the virus across the country. In combining this information with detailed maps of Peru's landscape, they were able to forecast likely future rabies invasions.