60 years ago, first landing at the South Pole paved the way for world-class Antarctic science 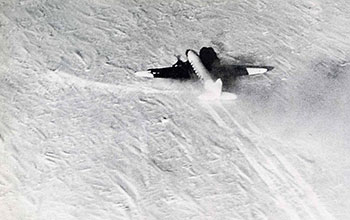 
This video provides a short history of U.S. flights that made South Pole science possible.

On October 31, 1956, seven U.S. naval aviators did what many thought was impossible...they landed a plane for the first time at the bottom of the world. The pilot, Lt. Cmdr. Conrad C. "Gus" Shinn landed the twin-engined R4D-5 Skytrain nicknamed Que Sera Sera, at 8:34 p.m. local time, skidding to a stop at 90 degrees South latitude. With engines running to avoid freeze-up, U.S. Navy Admiral George J. Dufek, commander of Operation Deep Freeze, quickly stepped out onto the frozen terrain and planted the Stars and Stripes at the South Pole.

After 49 minutes on the ice, the crew left the South Pole and returned to what is now NSF's McMurdo Station. The flight not only proved that a remote station could be supported by air, but opened up the continent to scientific discovery. Many more flights would follow, bringing construction materials and cargo needed to build the first of three research stations that would be built on the continent over the years. The flights also brought in scientists eager to tackle this vast unknown.

Fast forward 60 years...today the National Science Foundation's South Pole Station is host to cutting-edge, world-class science. Planes routinely fly to and from the bottom of the world carrying researchers, instruments and other cargo. Here, scientists study the earth's atmosphere; the origins of the universe and even the elusive subatomic particles called neutrinos - none of which would have been possible had it not been for Gus Shinn and his team and that historic first landing.