Bats include the fishing bat, vampire bats and many fig-eating species 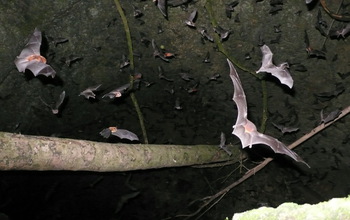 Each evening, thousands of bats rush out of caves in the Caribbean, here seen in Puerto Rico.

How long does it take a community of mammals to recover after a wave of species loss? Bats in the Caribbean Islands may hold new answers, biologists report in a paper published this week in the journal Nature Ecology & Evolution.

Caribbean Island bats form an ecologically diverse group that includes the fishing bat, vampire bats and many species of fig-eating bats. Because one-third of the group has disappeared over the past 20,000 years in the Greater Antilles -- islands in the Caribbean Sea that include Cuba and Jamaica -- the bats are ideal for studying the effects of extinctions, scientists say.

Using computer simulations, the researchers estimated how long it would take natural processes to restore the number of bat species that lived in the Greater Antilles 20,000 years ago.

"We discovered that it would take at least eight million years to regain the bat species lost," says Liliana Dávalos of Stony Brook University, co-author of the new paper. Funded through the National Science Foundation's (NSF) Dimensions of Biodiversity Program, Dávalos and Luis Valente of the Berlin Natural History Museum in Germany led a research team that compiled data on New World leaf-nosed bats and their relatives.

"The incredibly long time required to restore biodiversity shows the staggering consequences of extinctions, many caused by humans, on the long-term ecology of islands," Dávalos says.

Islands are natural laboratories of evolution and home to unique animals and plants, yet many have lost native species. While there is a debate as to what caused the Caribbean bat extinctions, the largest wave of species loss came after humans arrived, when more than half the islands' mammal species went extinct. Bats are now the most diverse group of surviving Caribbean terrestrial mammals.

According to Dávalos, the number of species on an island results from a balance of colonization, the formation of new species, and losses from extinction. The researchers studied these processes based on the evolutionary histories of bat species both alive and extinct.

They found that bat species in the Greater Antilles remained relatively stable over millions of years, but that recent extinctions -- most likely caused by habitat loss -- have disrupted this natural balance.

"Bats have been here a long time," Dávalos says. "We need to find ways of ensuring they will be long into the future."

Knowing how long it would take the bats to return will help researchers understand how animals adapt to changing environments, and how other animals might avoid similar fates.

"Human-caused changes to Earth's ecosystems are accelerating," says Leslie Rissler, program director in NSF's Division of Environmental Biology. "This study offers important information on how those changes will affect the loss and recovery of species in the future."

In addition to NSF, the Alexander von Humboldt Foundation; the Brandenburg Ministry of Science, Research and Culture; and the Netherlands Organisation for Scientific Research supported the research.