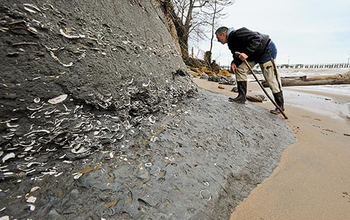 Mineralogist Robert Hazen in the field.

Robert Hazen's field -- mineralogy -- might seem like the most appropriate scientific specialty for studying what's happening below Earth's surface. But, he says, that job requires partnering with scientists from as many different disciplines as possible.

Over more than two decades, NSF supported Hazen's research to address fundamental questions about what happens to minerals in hot, high-pressure environments as found in the deep interiors of Earth and other planets, and how minerals interact with the molecules of living beings. Now, Hazen is working in an area where NSF has also made significant investments: the study of "deep carbon," or stores of carbon located deep below the surface that play a substantial role in the planet's carbon cycle.

"We're looking at the coevolution of the geosphere and the biosphere using data-driven discovery," said Hazen, senior staff scientist at the Carnegie Institution's Geophysical Laboratory and professor of earth science at George Mason University. "This is an aspect of science that's just emerging, using large data resources to make profound discoveries about this planet."

Hazen currently serves as executive director of the Deep Carbon Observatory, a 10-year project launched with Alfred P. Sloan Foundation funds to link researchers -- many of them supported by NSF -- across disciplines, with the shared goal of understanding more about how the planet functions.

Q: How would you describe the work the Deep Carbon Observatory does?

A: Think about carbon. It's an important element -- one that is essential to life. Carbon is important in terms of energy resources. Many new materials are carbon-based compounds, and of course climate and the environment are discussed all the time. NSF has been funding research in those areas for years.

But we're interested in carbon from crust to core. Ninety percent of Earth's carbon is beneath Earth's surface, in hidden reservoirs. We're not exactly sure what those look like or how much carbon is down there, because it is stored in various forms and moves around as part of a deep carbon cycle. However, important exchanges between carbon on the surface and the deep interior happen through a process called subduction, driven by plate tectonics, and through volcanism and other processes. We really have to understand those aspects of the carbon cycle.

Q: So even though you can't see it, this carbon could have a pretty big impact on your life?

A: Over long periods of geological time, this could have a huge impact. Also, there's a lot of carbon in CO2 coming out of volcanoes and diffuse sources. And Earth's surface and oceans soak up a lot of carbon dioxide, creating new kinds of minerals. Understanding this larger carbon cycle is important for understanding how Earth functions as a planet. How resilient is it to change?

Q: You seem to be building cross-disciplinary collaboration, incorporating paleontology, mineralogy and other fields. How important are those kinds of relationships for better understanding the planet's carbon cycle?

A: Science has long divided itself up into separate disciplines -- geology, biology, chemistry, physics -- but if you look at Earth, you can't see it in terms of separate disciplines. They're all integrated together, and if we're really going to understand our planet, we have to step back and view it that way. So our passion is integration -- international collaboration with physicists, chemists, biologists, geoscientists, space scientists and others all folded together using advanced mathematical techniques, big data, visualizations and analysis tools. We're breaking down the barriers to understanding. That's what we're striving for.

Q: How, for example, could someone studying fossils contribute to the work you're talking about?

A: Imagine you're interested in the history of life on Earth. Well, life on Earth doesn't arise in the absence of geographical surroundings. It has a chemical environment. It has a physical environment. As you look at the fossil record, what you're seeing is not just the history of the living world, but of the non-living world around it. If we can harness that information, we can unlock secrets of evolution that have never been seen before, because every fossil environment, every extinction event, took place in a physical and chemical environment on planet Earth.

Q: Is that a reciprocal relationship? Do the people studying fossils get information that helps them contextualize what they found?

Q: How many scientists are you working with, corresponding with or partnered with?

A: The Deep Carbon Observatory international collaboration involves more than 1,000 people from 50 countries. It's an amazing network, and the thing that's wonderful about it is that people interact and communicate in ways that I've rarely seen in science before. Everyone wants to learn from everyone else. The richness of this program comes from the fact that we have people from many disciplines, but they're not looking inward to their own disciplines. They're looking outward from their expertise to interact.

Q: I understand that a lot of your focus now is developing early career scientists. Why is that a priority?

A: The future is the early career scientists. They're such incredible people. In the Deep Carbon Observatory, of the over 1,000 collaborators, over half of them are early career -- graduate students, postdocs, or people in the first few years of a tenure track position. They're the people who are really going to carry the program's legacy onward, and they're passionate about learning all they can. They organize their own workshops. They initiate their own field expeditions and grants. And they also serve on all of our leadership committees, because the only way you're going to have future leaders is by giving them leadership opportunities.

Q: Do you have any kind of long-term goal in mind in your role with the Deep Carbon Observatory?

A: We see what we're doing, in a sense, as building an incredible scientific instrument. We see an opportunity to build an international network of early career scientists immersed in this idea of cross-disciplinary science. Imagine when our vision for a vast data network is in place, with open access and new data tools -- as long as you have a laptop and internet access you can make discoveries. This is such a democratic approach to science. You don't need expensive equipment located in one place in the world. Data sharing could open science to people regardless of their economic and physical environments.

Q: What's the aspect of the work that most excites you right now?

A: It's discovery through data. People say "How are microbes related to environments?" "How are fossils related to mass extinctions?" "How is this chemical or physical or geographical aspect of a mineral related to the evolution of the planet?"

We're answering those questions. It is an astonishing way for science to advance, and we're just at the very beginning of what can be done.