Cometh the devil weed. What's the best way to slay it? 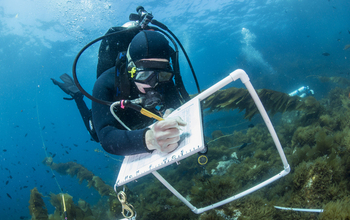 Devil weed, it's called, this invasive seaweed that's disturbing ecosystems in rocky reefs off the California coast. The seaweed, Sargassum horneri, is common along the shores of Japan and Korea. But like so many other invasive algae along coasts and in lakes and rivers, its spread is seemingly unstoppable.

Halting the march of an invader

Researchers at the National Science Foundation (NSF) Santa Barbara Coastal Long-Term Ecological Research (LTER) site compared several approaches for clearing the invasive plants from California's coastal ecosystems. The scientists looked for the most effective and efficient methods. They reported their results in a recent issue of the journal Management of Biological Invasions.

"Controlling invasive species in coastal waters is a challenging and important problem," said David Garrison, head of NSF's LTER Working Group. "These investigators examined the ecology of an invasive seaweed to determine the best strategy to control it."

From field experiments conducted off Santa Catalina Island, California, the ecologists determined that plants with severed stems don't regenerate and will eventually die.

Slashing seaweed stems, instead of removing whole plants, may be more effective than previously tried methods in killing devil weed and stopping its propagation, according to Daniel Reed, principal investigator of the NSF Santa Barbara Coastal LTER site and co-author of the Management of Biological Invasions paper, along with Lindsay Marks of the University of California Santa Barbara, and Adam Obaza of Ocean Associates, Inc. in Arlington, Virginia.

"We also found that the best places to control the spread of this seaweed are those that haven't been completely overtaken by the invasives," said Reed.

The biologists discovered that using an underwater suction device had the highest rate of success in removing seaweed, but this method allowed only two scuba divers at a time to work. It also had significant startup costs and logistical challenges.

The second method the researchers tested was the "line and bag method," in which divers placed seaweed into mesh bags hung on a line. The bags were then ferried ashore for disposal. This method was less efficient than the suction method, but it was also less expensive, required little training, and allowed for more than two divers to work at once.

The most auspicious season for slaying devil weed? Early winter, say the ecologists.

"The removal of S. horneri in early winter, just prior to the onset of reproduction, reduced recruitment in the next generation by an average of 54 percent, and reduced survivorship to adulthood by an average of 25 percent," wrote the scientists in their journal paper.

The findings, said Reed, suggest that fighting this invader is most effective during cooler-water years that favor the growth of native California algae. "The 2015-16 El Niño year, for example, with its warmer waters, was not one of those times," Marks said. "Sargassum horneri flourished."

The results of the research will help coastal managers identify strategies to slow the spread of the invasive seaweed, said Garrison, and contribute to the health of ecosystems in California and wherever else invasive algae are a problem.