Sea slug has an unusual lifestyle 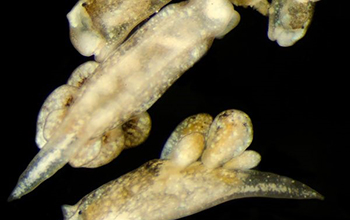 Finding this sea slug on Florida's Cedar Key shows how little is known about marine biodiversity.

Feet from the raw bars and seashell-colored condominiums of Florida's Cedar Key, NSF-supported researchers at the Florida Museum of Natural History and California State University discovered a new species of sea slug that is a rare outlier in a group famous for being ultra-vegetarians. The discovery is published in the journal Zootaxa.

The slug belongs to the sacoglossans, a group of more than 300 species that are such enthusiastic eaters of plants that many turn green and some resemble leaves.

But this species, Olea hensoni, has gone rogue, joining two other sacoglossan species – Olea hansineensis in the northeast Pacific Ocean and Calliopaea bellula in the Mediterranean Sea – that abandoned a diet of seaweed to prey on the eggs of their fellow slugs and snails. It’s surprising, the scientists say, that a member of this group would show up around Florida, because the other two species are from cold, northern waters.

"This research shows that exciting new discoveries can be made in poorly known groups in even the most heavily sampled areas," says Simon Malcomber, a program director in NSF's Division of Environmental Biology, which funded the research.