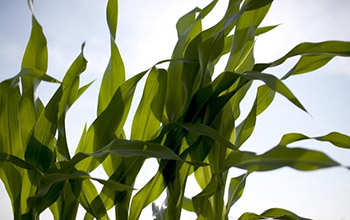 A new study reveals genetic differences that influence how corn responds to concentrations of ozone.

Like atmospheric methane and carbon dioxide, ground-level ozone is on the rise. But ozone, a noxious chemical byproduct of fossil fuel combustion, has received relatively little attention as a potential threat to corn agriculture.

A new study exposes how a genetically diverse group of corn plants is likely to respond to future ozone levels. The results, reported in the journal Global Change Biology, found that some members of the corn family are more susceptible than others to yield losses under high ozone air pollution. Discovering the genetic underpinnings of those differences could help plant scientists develop ozone-resistant corn.

Scientists know that current ozone levels decrease corn yields by as much as 10%. That's as much as drought or flooding, or any single pest or disease, but ozone is a relatively unstudied component of yield loss in the U.S., according to the biologists.

The scientists used the Free Air Concentration Enrichment facility at the University of Illinois to track the real-world consequences of higher atmospheric ozone levels in an agricultural field.

The researchers planted 45 hybrid corn plants representing the major types of corn -- popcorn, broom corn, dent, flint and others -- to look for variation in their responses to high ozone levels. They found that some hybrids were more sensitive to ozone stress than others.

"This study shows that there is a genetic basis to ozone responses, and that continued research will reveal how plants process ozone and its harmful by-products," says Anne Sylvester, a program director in NSF's Division of Integrative Organismal Systems, which funded the research. "It provides hope for the future if plants with resistance traits can be identified -- and is another step on the way to breeding plants that are resilient to a changing environment."