Why mudslides that follow wildfires in Southern California can be deadly 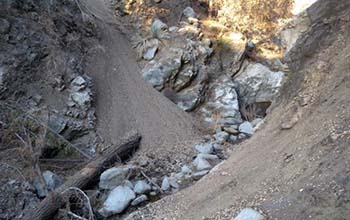 The mudslides that follow wildfires in Southern California can be deadly -- and difficult to predict. New National Science Foundation-funded research will help officials identify areas prone to these mudslides and be able to respond before disaster occurs, according to scientists.

Mudslides, or debris flows, may occur when rainfall washes away the buildup of sediment in mountain channels. Roughly equal parts water and sediment, debris flows are strong enough to carry large boulders downhill and threaten communities in or near the mountains.

The debris flows in January 2018 that hit Montecito, California, killed 23 people and caused hundreds of millions of dollars in damage. Authorities attributed the mudslides to the wildfires that had swept through the area the previous month.

Vegetation holds back the sediment in these steep landscapes, but as the vegetation burns during a wildfire, gravity transports the sediment from hillsides down to channels in a process called dry sediment loading, say Roman DiBiase, a geoscientist at Penn State, and his colleagues.

In steep landscapes like those in Southern California, dry sediment loading plays a more significant role in the severity of post-wildfire mudslides than do rainfall, shallow landslides and burn severity, say the scientists. They reported their findings in the February issue of Geology.

DiBiase and Michael Lamb, a geologist at the California Institute of Technology, looked at three lidar datasets of the western San Gabriel Mountains. Lidar involves flying a laser scanner over a landscape and sensing the returning light. It allows scientists to reconstruct the topography at a high resolution.

The datasets were collected several times -- before the 2009 Station Fire, immediately following the fire and before the first rainfall, and then six years later, after rainfall had led to erosion and debris flows.

The researchers found widespread evidence that dry sediment loading added anywhere from three to 10 feet of debris to mountain channels, which were subsequently washed out by rainfall.

"The direct and indirect effects of wildfire on the public are a serious issue in the western U.S. and elsewhere, and this study could lead to better management of those effects in the future," said Justin Lawrence, a program director in NSF's Division of Earth Sciences.