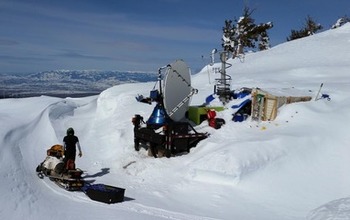 A researcher travels by snowmobile to the site of the SNOWIE project in western Idaho.

Scientists have successfully used a combination of radars and snow gauges to measure the impact of cloud seeding on snowfall. The new research addresses decades of speculation about the effectiveness of artificial methods to increase precipitation, demonstrating that cloud seeding can boost snowfall across a wide area if the atmospheric conditions are favorable.

The researchers, including scientists at the University of Wyoming, University of Colorado Boulder, University of Illinois at Urbana-Champaign and National Center for Atmospheric Research, arrived at their results by analyzing detailed observations taken in a cloud seeding experiment in Idaho during the winter of 2017. They found that injecting clouds with silver iodide generated precipitation at multiple sites, sometimes creating snowfall where none had existed.

The National Science Foundation-funded study provides the most comprehensive evidence to date that cloud seeding can generate rain or snow. The study is published in Proceedings of the National Academy of Sciences. Funding also came from the Idaho Power Company.

"This project represents a successful public-private partnership," says Nick Anderson, a program director in NSF's Division of Atmospheric and Geospace Sciences. "The research has resulted in fundamental new knowledge about clouds and precipitation and other information that’s relevant to operational water managers."

Atmospheric scientist Jeff French of the University of Wyoming credits modern technology with making the detailed cloud-seeding observations happen, citing the use of ground-based radar, radar on the university's King Air research aircraft, and multiple passes over a target mountain range near Boise. Despite numerous experiments spanning several decades, no direct, unambiguous observation of this process existed prior to this research, he says.

Numerical modeling of precipitation measurements was conducted using the supercomputer, nicknamed Cheyenne, at the NCAR-Wyoming Supercomputing Center. The numerical models simulated clouds and snow precipitation -- created in natural storms and with cloud seeding -- over the Payette Basin near Boise.

The researchers cautioned, however, that successfully producing precipitation requires the presence of clouds. The results are also dependent on such atmospheric factors as local winds. Even when cloud seeding enhances precipitation, additional factors will determine whether it is a cost-effective approach to increasing snowpack or replenishing reservoirs.