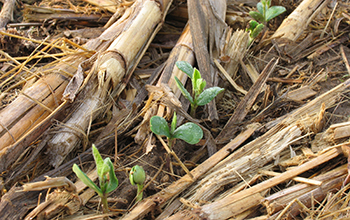 Scientists found significant benefit to the environment and to crop yield in no-till agriculture.

A study in Global Change Biology clearly demonstrates significant benefit to the environment and to crop yield for farmers practicing no-till versus tilled agriculture consistently over many years.

The Michigan State University scientists' work demonstrates the importance of long-term research for obtaining meaningful results, especially on the outcomes of management changes that can be slow to develop and to detect, such as the attributes of cropping systems on soil structure and organic matter. Studies of shorter duration would have produced misleading results, the researchers say.

"The findings drive home the importance of long-term studies because they reveal unexpected results," ecologist Nick Haddad said. "There were many slices of time when we would have gotten the wrong answer, especially if the study had lasted less than 10 years."

"Every year for more than 30 years, the yield in no-till treatments increased versus the yield in tilled treatments," Haddad said. "I would have expected a point where the yields and economic benefits reached their peak, but they continued to rise. It was jaw-dropping."

Based on assumptions about the financial investment required in converting from conventional tilling to no-till agricultural practices at the study's onset, overall farmer profits were initially reduced, despite the increase in actual crop yields in no-till fields each year.

"The initial economic losses reflected the costs inherent in new equipment, chemical costs and labor input needed at that time," Haddad said. "As these costs were met, profits rose. Even better, current farming practices eliminate these costs, such that the financial benefits of no-till practices accrue nearly immediately."

Added Doug Levey, a program director in NSF's Division of Environmental Biology, "A lot of agricultural research is driven by the need for short-term benefits, such as increased yields or decreased costs. This study shows the value of long-term studies and perspectives."