First research to measure the bioaerosol composition of the Southern Ocean 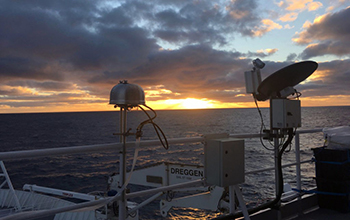 Aerosol filter samplers probe the air over the Southern Ocean on the research vessel Investigator.

Atmospheric scientist Sonia Kreidenweis of Colorado State University and her colleagues have identified an atmospheric region unchanged by human-related activities. The National Science Foundation-funded work was part of the first study to measure the bioaerosol composition of the Southern Ocean south of 40 degrees south latitude.

Samples were collected during the NSF-funded SOCRATES field campaign.

The team found that the boundary layer air that feeds lower clouds over the Southern Ocean is pristine -- free from particles, called aerosols, that are produced by human activities or transported from distant lands. The findings are published in Proceedings of the National Academy of Sciences.

Weather and climate are complex processes connecting each part of the world to every other, and with climate changing rapidly, it's difficult to find any area or process untouched by people. Kreidenweis and her team suspected that the air directly over the remote Southern Ocean would be least affected by humans and dust from continents. They set out to discover what was in the air and where it came from.

"We were able to use bacteria in the air over the Southern Ocean as a diagnostic tool to infer key properties of the lower atmosphere," said researcher Thomas Hill, coauthor of the study. "The aerosols controlling the properties of Southern Ocean clouds are strongly linked to ocean biological processes, and Antarctica appears to be isolated from the southward dispersal of microorganisms and nutrient deposition from southern continents.

"Overall, it suggests that the Southern Ocean is one of very few places on Earth that has been minimally affected by anthropogenic activities."

Added Eric DeWeaver, a program director in NSF's Division of Atmospheric and Geospace Sciences, "The punch line is that, if you want to understand the clouds, you should ask the microbes. It's a testament to the interconnectedness of the world and to the cleverness of scientists who can figure out how to learn from it."