Evolution transforms plants into some of nature's best biochemists 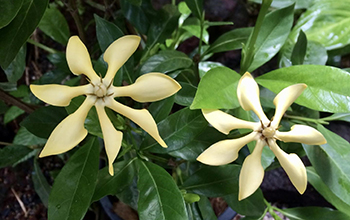 Plants are some of nature's most extraordinary chemists. Unlike animals, they can't run from predators or pathogens. They can't uproot to seek out mates or spread their seeds. Instead, they manufacture chemicals: toxins to kill bacteria; bitter alkaloids to ward off herbivores; sweet nectar and jewel-colored pigments to draw in pollinators; and birds that can help disperse seeds.

But how did trees, shrubs and flowers obtain these capabilities?

In a National Science Foundation-funded study, scientists explore this question through the evolution of the gardenia, Gardenia jasminoides, an evergreen shrub with white flowers planted as an ornamental in the tropics.

Researchers sequenced the genome of the gardenia, then looked at how the plant makes a compound called crocin. This chemical, which gives saffron its bright hue, is also responsible for the red-orange shade of the gardenia's ripened fruits.

The scientists identified the genes involved in making crocin and used them to create the compound in the lab. This work -- which included deciphering the step-by-step process that gardenias use to synthesize crocin -- lays the foundation for large-scale production of the chemical, which is thought to have medicinal properties as an antioxidant.

The research also explored the origins of crocin in gardenias. The findings, published in BMC Biology, highlight the power of a process called tandem gene duplication, which gives organisms flexibility to expand the arsenal of genetic tools at their disposal. It's just one-way plants can evolve new capabilities, but it's a crucial one.

"The important principle is that plants can reinvent things," says study co-author Victor Albert, a University at Buffalo biologist. "They can duplicate some parts of their genetic toolkit and twiddle the functions."