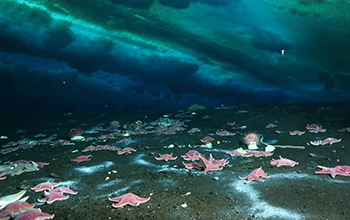 Scientists have discovered the first active methane seep in Antarctica.

The discovery of the first active methane seep in Antarctica is providing scientists with a new understanding of the methane cycle, and the role methane found in this region may play in warming the planet.

A methane seep is a location where methane gas escapes from an underground reservoir into the ocean. Methane seeps have been found throughout the world's oceans, but this one, discovered in the Ross Sea, is the first active seep found in Antarctica, said Andrew Thurber, a marine ecologist at Oregon State University.

"Methane is effective at warming our atmosphere, and the Antarctic has vast reservoirs that are likely to open up as ice sheets retreat due to climate change," Thurber said. "This is a significant discovery that can help fill a large hole in our understanding of the methane cycle."

The researchers' findings were published in the journal Proceedings of the Royal Society B. The study was supported by the U.S. National Science Foundation.

Methane is a greenhouse gas that's more powerful than carbon dioxide at warming the planet. Most methane in ocean water and sediment is kept out of the atmosphere by microbes that consume it.

Thurber and his colleagues discovered that microbes around the Antarctic seep are different than those elsewhere in the world's oceans. The finding helps researchers better understand methane cycles and the factors that determine whether methane will reach the atmosphere and contribute to further warming.

The Ross Sea seep was discovered in an area scientists have studied for more than 60 years, but the seep was not active until 2011, Thurber said.

An expansive microbial mat, about 70 meters long by one meter across, formed on the sea floor about 10 meters below the frozen ocean surface. Mats, which are produced by bacteria that exist in a symbiotic relationship with methane consumers, are a telltale indication of the presence of a seep, the scientists found.

"This finding offers a window into understanding how methane seeps behave in vast cold Antarctic waters," said Karla Heidelberg, a program director in NSF's Office of Polar Programs. "Consumption of methane by microbes is an important control for methane additions to the atmosphere from the seafloor."