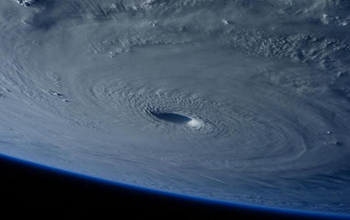 A tropical cyclone as seen from space; Atlantic hurricanes and East Asia's weather may be linked.

Research led by University of Iowa investigators has identified a climate system in East Asia that may influence the frequency of tropical storm development in the Atlantic Ocean.

The EASJ is an upper-level river of wind that originates in East Asia and moves west to east across the globe. It carries with it an atmospheric phenomenon called a Rossby wave.

Rossby waves occur naturally in the Earth's oceans and atmosphere, forming because of the planet's rotation. The researchers say that Rossby waves affect wind shear, a key element in the formation of tropical storms.

"When the EASJ is stronger, it can enhance this pattern, which leads to stronger connections and stronger wind shear in the North Atlantic," says climate scientist Wei Zhang, corresponding author on the study in the journal Geophysical Research Letters. The stronger EASJ can suppress Atlantic tropical cyclone formation.

The scientists observed nearly 40 years of Atlantic tropical cyclones during prime formation season, from August to November, and the connection with EASJ activity between July and October.

"What we found is that there is a signal [Rossby waves] in terms of wind shear, and that this signal is coming from Asia over the Atlantic via the East Asian Subtropical Jet Stream," says Zhang. "The jets act as conduits for the signal originating in Asia, so it can propagate over the Atlantic."

Adds Laura Lautz, a program director in NSF's Division of Earth Sciences, "As we head into the 2020 hurricane season, everyone is acutely aware of the devastating impacts these events can have on people and property. These findings help us understand why some seasons have more frequent hurricanes than others, and they reduce uncertainties in predictions for the future."