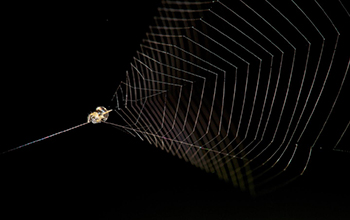 A slingshot spider is ready to launch its cone-shaped web at a flying insect.

Running into an unseen spiderweb in the woods can be scary enough, but what if you had to worry about a spiderweb -- and the spider -- being catapulted at you? That's what happens to insects in the Amazon rain forests of Peru, when a tiny slingshot spider launches a web -- and itself -- to catch unsuspecting flies and mosquitoes.

Researchers at Georgia Tech have conducted what may be the first study of how this arachnid stores enough energy to produce an acceleration 100 times that of a cheetah. That acceleration produces velocities of 4 meters per second and subjects the spider to forces of approximately 130 Gs, more than 10 times what fighter pilots can withstand without blacking out.

The study, supported by the U.S. National Science Foundation, was published in the journal Current Biology. Understanding how web silk stores energy could potentially provide new sources of power for tiny robots and other devices and lead to new applications for the robust material.

"This is an amazing observation of how spiders can withstand such G-forces, how spider silk is capable of storing tremendous amounts of energy, and how these spiders precisely control their release to target prey," says Richard Cyr, a program director in NSF's Division of Molecular and Cellular Biosciences. "How this might lead to bio-inspired nano-based machines is almost the stuff of science fiction."

The Peruvian spider and its cousins stand out among arachnids for their ability to make external tools -- in this case, their webs -- and use them as springs to create ultrafast motion. Their ability to hold a ready-to-launch spring for hours while waiting for an approaching mosquito suggests yet another amazing tool: a latch mechanism to release the spring.

"Unlike frogs, crickets, or grasshoppers, the slingshot spider is not relying on its muscles to jump really quickly," said project scientist Saad Bhamla. "When it weaves a new web every night, the spider creates a complex, three-dimensional spring. If you compare this natural silk spring to carbon nanotubes or other human-made materials in terms of power density or energy density, it is orders of magnitude more powerful."