Asteroid measures 10 to 20 feet across, roughly the size of an SUV 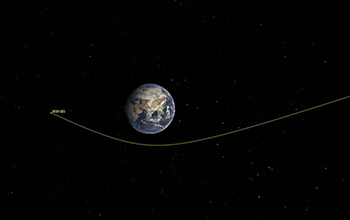 On August 16, 2020, the Zwicky Transient Facility, a robotic survey camera located at the Palomar Observatory near San Diego, spotted an asteroid that had, just hours earlier, traveled only 1,830 miles (2,950 kilometers) above Earth's surface.

Designated 2020 QG, the asteroid is the closest known to fly by Earth without impacting the planet. The previous known record-holder is asteroid 2011 CQ1, discovered by the Catalina Sky Survey in 2011, which passed higher above Earth than 2020 QG by about 1,550 miles (2,500 kilometers).

Asteroid 2020 QG is 10 to 20 feet (3 to 6 meters) across, or roughly the size of an SUV, so it was not big enough to do any damage even if it had been pointed at Earth; instead, it would have burned up in our planet's atmosphere.

"The asteroid flew close enough to Earth that Earth's gravity significantly changed its orbit," says Zwicky Transit Facility co-investigator Tom Prince, a physicist at Caltech. Asteroids of this size that fly roughly as close to Earth as 2020 QG do occur about once a year or less, but many of them are never detected.

"ZTF's large-field of view and rapid data processing allows it to find rare asteroids like this that other telescopes might not find," says Caltech's George Helou, ZTF co-investigator.

ZTF, which is funded by the U.S. National Science Foundation and other institutions, scans the entire northern sky every three nights in search of supernovas, erupting stars and other objects that otherwise change or move in the sky.

ZTF team members also search for near-Earth asteroids. When these space rocks speed across the sky, they leave streaks in the ZTF images. Machine-learning programs automatically sort through 100,000 images in search of these streaks, then narrow down the best asteroid candidates to be followed up on by humans. That results in about 1,000 images team members and students sort through by eye every day.