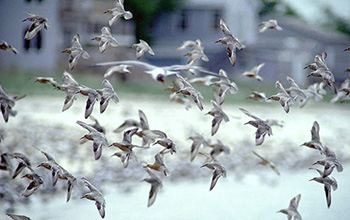 Looking for a bird's-eye view of human impacts? A new study, published in the journal Nature, provides the most comprehensive picture yet of how human noise and light pollution affect birds throughout North America.

The effects of noise and light pollution on the health of bird populations had been largely overlooked until recent studies suggested that these stressors can harm individual species. With this new study by biologists at California Polytechnic State University, a continent-wide picture has emerged.

The U.S. National Science Foundation-funded researchers looked at a huge collection of datasets -- including those collected by citizen scientists -- to assess how light and noise affected the reproductive success of 58,506 nests from 142 species across North America.

The biologists found that light pollution causes birds to begin nesting up to a month earlier than normal in open environments such as grasslands and wetlands, and 18 days earlier in forested environments. The consequence could be a mismatch in timing -- hungry chicks may hatch before their food is available.

When considering noise pollution, results showed that birds living in forested environments tend to be more sensitive to noise than birds in open environments.  Noise pollution delayed nesting for birds whose songs are at a lower frequency and thus more difficult to hear through low-frequency human noise.

The study is the first step toward a larger goal of developing a sensitivity index for all North American birds. The index would allow managers and conservationists to cross-reference multiple physical traits for a species to assess how factors such as light and noise pollution would affect it.

"Although birds live in the same world we do, they experience it in a profoundly different way -- they see and hear better than humans, and are more sensitive to increased light and noise," said Doug Levey, a program director in NSF's Division of Environmental Biology.