New sunspot cycle could be one of the strongest on record

Scientists use extended, 22-year solar cycle to make the forecast 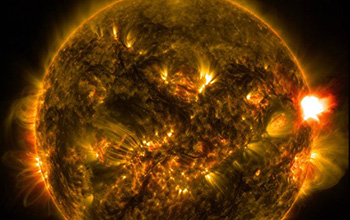 The new sunspot cycle that began this fall could be one of the strongest on record.

A team of scientists led by the National Center for Atmospheric Research is predicting that the sunspot cycle that started this fall could be one of the strongest since record-keeping began.

In a new article in Solar Physics, the researchers predict that Sunspot Cycle 25 will peak with a maximum sunspot number somewhere between approximately 210 and 260, which would put the new cycle in the company of the top few ever observed.

The cycle that just ended, Sunspot Cycle 24, peaked with a sunspot number of 116.

If the new NCAR-led forecast is borne out, it would lend support to the research team's theory -- detailed in a series of papers published over the last decade -- that the sun has overlapping 22-year magnetic cycles that interact to produce the well-known, approximately 11-year sunspot cycle as a byproduct.

The 22-year cycles repeat like clockwork and could be a key to making accurate predictions of the timing and nature of sunspot cycles, as well as many of the effects they produce, according to the study's authors.

"Scientists have struggled to predict both the length and the strength of sunspot cycles because we lack a fundamental understanding of the mechanism that drives the cycle," said NCAR deputy director Scott McIntosh, a solar physicist who led the study. "If our forecast proves correct, we will have evidence that our framework for understanding the sun's internal magnetic machine is on the right path."

The new research was supported by the U.S. National Science Foundation, NCAR's sponsor, and NASA's Living With a Star Program.

"Such a dramatic increase in the number of sunspots would be significant to us on Earth," said Maria Womack, a program director in NSF's Division of Atmospheric and Geospace Sciences. "Sunspots are associated with solar geomagnetic storms. If these storms collide with Earth, they could cause northern lights, but could also be disruptive to our electrical infrastructure."