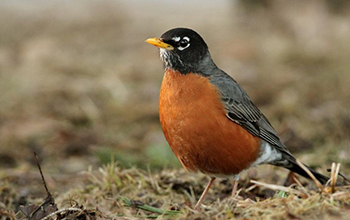 True thrushes, like the American robin, have been flagged as likely Lyme hosts.

Birds play an underrecognized role in spreading tickborne disease. They can spread such disease because of their capacity for long-distance travel and tendency to split their time in different parts of the world -- patterns that are shifting owing to climate change. Knowing which bird species can infect ticks with pathogens can help scientists predict where tickborne diseases might emerge and pose a health risk to people.

A U.S. National Science Foundation-funded study published in the journal Global Ecology and Biogeography used machine learning to identify bird species with the potential to transmit the Lyme disease bacterium Borrelia burgdorferi as ticks feed on the birds.

Senior author Barbara Han, a disease ecologist at the Cary Institute of Ecosystem Studies, says that "to predict and monitor species that could spread tickborne diseases to people, we first need to know which traits make certain animals good pathogen hosts. We used machine learning to assess bird species traits, paired with Lyme infection data from ticks found on birds, to predict bird species that have the potential to spread Lyme."

'The research team developed a model that identified with 80% accuracy birds known to spread Lyme to ticks, and revealed 21 species that should be prioritized for surveillance.

Species in the genus Turdus, commonly known as true thrushes, were found to have a significantly greater likelihood of spreading Lyme compared to other birds. This finding suggests that thrushes might be the riskiest bird species for Lyme transmission. Passerines, or perching birds, also tended to have higher risks, as did birds that primarily eat seeds and those that forage on the ground -- behavior that would put them in reach of questing ticks.

Identifying possible Lyme-carrying bird species could have direct implications for our health. Tickborne diseases, especially Lyme disease, can be difficult to diagnose. Knowing where ticks and the diseases they carry are spreading can help medical practitioners prepare for diagnosis and treatment, improving health outcomes for patients.

"This study shows the power of machine learning for identifying species that can transmit disease," says Sam Scheiner, a program director in NSF's Division of Environmental Biology. "This approach can be applied to many other diseases, such as COVID-19, that are transmitted by animals, providing an important tool for preventing disease outbreaks."