Carbon, the backbone of life on Earth, might have been delivered after planetary formation 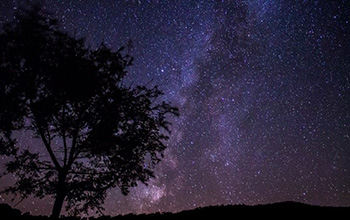 We are indeed made of stardust, according to NSF-funded scientists.

We are made of stardust, the saying goes. U.S. National Science Foundation-funded research at the University of Michigan reveals that the statement may be more true than we thought.

The first study, led by U-M researcher Jie (Jackie) Li and published in Science Advances, reports that most of the carbon on Earth was likely delivered from the interstellar medium, the material that exists in space between stars in a galaxy. The delivery happened well after the formation and warm-up of the protoplanetary disk, the cloud of dust and gas that circled our young sun and contained the building blocks of the planets.

Carbon was also likely sequestered into solids within one million years of the sun's birth -- which means that carbon, the backbone of life on Earth, survived an interstellar journey to our planet.

Previously, researchers thought carbon in the Earth came from molecules that were initially present in nebular gas, which then accreted into a rocky planet when the gases were cool enough for the molecules to precipitate.

The team points out that the gas molecules that carry carbon wouldn't be available to build Earth because once carbon vaporizes, it does not condense back into a solid. The researchers inferred that most of Earth's carbon was likely inherited directly from the interstellar medium, avoiding vaporization entirely.

"The notion that carbon might have been delivered after planetary formation is revolutionary," said Luke Sollitt, a program director in NSF's Division of Astronomical Sciences. "Studies like this, by exploring how Earth became equipped with the building blocks for life, will help us understand where we came from."

A planet's carbon must exist in the right proportion to support life as we know it. Too much carbon, and the Earth's atmosphere would be like that of Venus, trapping heat from the sun and maintaining a temperature of about 880 degrees Fahrenheit. Too little carbon, and Earth would resemble Mars: an inhospitable place unable to support water-based life, with temperatures around 60 below zero.

In a second study led by University of Minnesota scientists, the researchers looked at how carbon is processed when small precursors of planets, known as planetesimals, retain carbon during their early formation. By examining the metallic cores of these bodies, now preserved as iron meteorites, the astronomers found that during this key step of planetary origin, much of the carbon must be lost as the planetesimals melt, form cores and lose gas.

The study was published in Proceedings of the National Academy of Sciences.