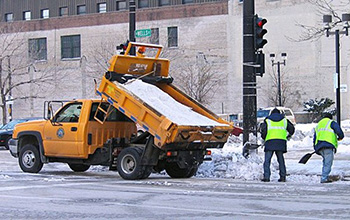 When winter storms threaten to make travel dangerous, people often turn to salt, spreading it liberally over highways, streets and sidewalks to melt snow and ice.

However, a new study led by Sujay Kaushal of the University of Maryland warns that introducing salt into the environment -- whether it's for de-icing roads, fertilizing farmland or other purposes -- releases toxic chemical cocktails that create a serious and growing global threat to our freshwater supply and to human health.

Kaushal's study is the first comprehensive analysis of the complicated and interconnected effects caused by Freshwater Salinization Syndrome and its impact on human health. This work suggests that the world's freshwater supplies could face serious threats at local, regional and global levels if a coordinated management approach is not applied to human sources of salt.

The U.S. National Science Foundation-funded study was published in the journal Biogeochemistry. "The pervasive issue of freshwater salinization is compounded by the challenge of uniquely fingerprinting the sources of the salt, which are ubiquitous, and the persistence of chloride in the environment," said Laura Lautz, a program director in NSF's Division of Earth Sciences. "This study provides some tangible recommendations for future management strategies that are supported by the science."

"We used to think about adding salts as not much of a problem," said Kaushal. "Now we're looking into both the acute exposure risks and the long-term health, environmental and infrastructure risks of all these chemical cocktails that result from adding salts to the environment, and we're saying, 'This is becoming one of the most serious threats to our freshwater supply.'"

When Kaushal and his team compared data and reviewed studies from freshwater monitoring stations throughout the world, they found a general increase in chloride concentrations on a global scale. Chloride is the common element in many different types of salts, such as sodium chloride (table salt) and calcium chloride, which is commonly used for road salt.

The major human-related salt source in areas such the Northeastern U.S. is road salt, but other sources include sewage leaks and discharges, water softeners, agricultural fertilizers and fracking brines enriched with salts.

In addition, indirect sources of salts in freshwater include weathering roads, bridges and buildings, which often contain limestone, concrete or gypsum, all of which release salt as they break down. Ammonium-based fertilizers can also lead to the release of salts in urban lawns and agricultural fields. In coastal environments, sea level rise can be another source of saltwater intrusion.