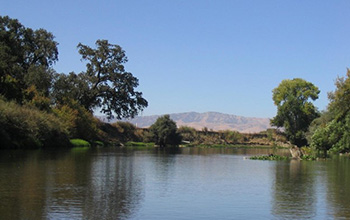 Riverbank woodlands along the lower Tuolumne River near Merced, California.

A U.S. National Science Foundation-funded study of woodland ecosystems that provide habitat for rare and endangered species along streams and rivers throughout California reveals that some of these ecologically important areas are inadvertently benefitting from water that humans are diverting for their own needs.

Although it seems like a short-term boon to these ecosystems, the artificial supply creates an unintended dependence on its bounty, threatens the long-term survival of natural communities and spotlights the need for changes in the way water is managed across the state.

"We need to be more intentional in incorporating ecosystem water needs when we manage water -- both for aquatic organisms and species on land," said Melissa Rohde of the SUNY College of Environmental Science and Forestry, the lead author of a study published in Proceedings of the National Academy of Sciences. "These forest ecosystems are in a precarious state because we have disrupted the natural hydrologic processes that these plant species rely upon to support and sustain key life processes."

In California's seasonally dry Mediterranean climate, plants and animals are adapted to rely on precipitation and soil moisture recharge during the rainy winter and spring seasons for reproduction and growth during the typically dry summers. Once soil moisture is exhausted, tree species often found in stream corridors such as willows, cottonwoods and oaks typically use groundwater from deeper depths. However, as Rohde and her colleagues discovered, the story is more complicated.

By analyzing five years of vegetation greenness data from satellite imagery, the researchers found that in some cases these ecosystems were affected by "subsidies of water" delivered via human regulation of rivers, agricultural canals and discharges from wastewater treatment plants. That discovery, Rohde said, was a "mind-bender." Altered streamside woodlands in the most arid regions of the state stayed greener longer into the dry season and were less responsive to changes in groundwater levels than natural ecosystems.