Need for hardier plants that can withstand drier conditions 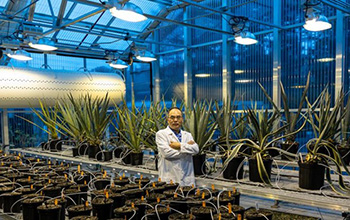 Scientists use a gene from agave to engineer greater stress tolerance in plants.

Scientists at Oak Ridge National Laboratory (ORNL), have discovered a single gene that simultaneously boosts plant growth and tolerance for stresses such as drought and salt, all while tackling the root cause of climate change by enabling plants to pull more carbon dioxide from the atmosphere.

As climate change triggers more frequent and longer-lasting droughts, water scarcity concerns are escalating. Only about 3% of the world's water is freshwater, and much of that is frozen in ice or otherwise unavailable for use. Agriculture is the biggest freshwater consumer worldwide, which emphasizes the need for hardier plants that can withstand drier conditions.

With the aim of engineering more productive and drought-tolerant bioenergy crops, ORNL scientists have been studying the mechanisms that allow desert plants, such as agave and Kalanchoë, to thrive in dry conditions.

Desert plants use a form of photosynthesis known as crassulacean acid metabolism, or CAM, to hold carbon dioxide in their cells overnight to be turned into sugars in the daylight hours. To survive extreme desert temperatures, CAM plants open their stomata, or leaf pores, to capture carbon dioxide only during the night and keep them closed during the heat of day to avoid water loss.

U.S. National Science Foundation-funded scientists identified the key genes for CAM photosynthesis in 2017 using the laboratory's Titan supercomputer. Building on that study, researchers homed in on a novel variant of an important enzyme and found that it triggers two pathways simultaneously -- one for carbon fixation and plant growth, and another that produces proline, a key amino acid known to increase stress tolerance. The results are published in Cells.

"It is unusual to find that a single genetic modification can have multiple benefits," said ORNL's Xiaohan Yang, a plant systems and synthetic biologist who led the study. "We are seeing more examples of this phenomenon where a single gene acts as a master regulator that turns on many other genes both upstream and downstream from it."

Anthony Garza, a program director in NSF's Division of Molecular and Cellular Biosciences added, "This finding is a demonstration of how basic biological research funded by NSF can be applied to an important problem of our time. We have an urgent need to generate plants that are more stress-resistant and therefore able to cope with the effects of climate change."