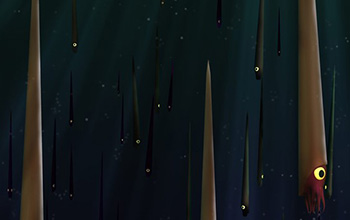 U.S. National Science Foundation-funded paleontologists David Peterman and Kathleen Ritterbush of the University of Utah know that it's one thing to use math and physics to understand how ancient marine creatures moved through the water. It's another thing to put replicas of those creatures into the water and see for themselves.

They're among the scientists who, through a range of methods including digital models and 3D-printed replicas, are "de-fossilizing" animals of the past to learn how they lived.

"These novel visualization and modeling techniques will not only lead to new understanding about this interesting group of organisms, but are likely to lead to new approaches to tackling questions in the field of paleobiology," says Dena Smith-Nufio, a program director in NSF's Division of Earth Sciences.

Peterman, Ritterbush and colleagues took 3D-printed reconstructions of fossil cephalopods to actual water tanks, including a swimming pool, to see how their shell structure may have been tied to movement and lifestyle. Their research is published in PeerJ. The scientists found that cephalopods with straight shells called orthocones likely lived a vertical life, jetting up and down to catch food and evade predators. Others with spiral shells called torticones added a gentle spin to their vertical motions.

"Thanks to these novel techniques," says Peterman, "we can trudge into a largely unexplored frontier in paleobiology. Through detailed modeling, these techniques paint a clearer picture of the capabilities of these ecologically significant animals while they were alive."

The researchers are veterans of this style of "virtual paleontology," having worked with digital ammonoid models and 3D-printed versions to test hypotheses about their evolution and lifestyles. Most ammonoids have coiled shells, like today's chambered nautilus, and darted around the ocean in all directions.

Peterman and Ritterbush explored a different shell shape -- the straight-shelled orthocone. Straight shells evolved several times in different lineages throughout the fossil record, suggesting they had some adaptive value.

"This is important because orthocones span a huge chunk of time and are represented by hundreds of genera," Peterman says, and many reconstructions and dioramas show orthocones as horizontal swimmers like squid. "They were major components of marine ecosystems, yet we know very little about their swimming capabilities."