Most of the viruses were previously unknown to humans, study finds 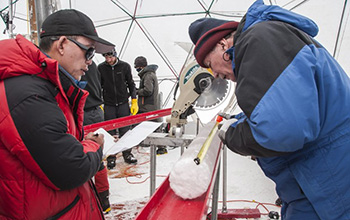 Scientists who study glacier ice have found viruses nearly 15,000 years old in ice samples from the Tibetan Plateau in China. Most of those viruses, which survived because they had remained frozen, are unlike any viruses that have been cataloged to date.

The findings, published in Microbiome, could help scientists understand how viruses have evolved over centuries. The researchers also created a new, ultra-clean method of analyzing microbes and viruses in ice without contaminating it.

The U.S. National Science Foundation-funded researchers analyzed ice cores from the Guliya ice cap that were collected at high altitudes -- the summit of Guliya, where this ice originated, is 22,000 feet above sea level. The ice cores contain layers of ice that accumulate year after year, trapping whatever was in the atmosphere around them at the time each layer froze. Those layers create a timeline, which scientists have used to understand more about climate change, microbes, viruses and gases throughout history.

Using a combination of traditional and new techniques to date the ice, researchers determined that it was nearly 15,000 years old.

The scientists found genetic codes for 33 viruses. Some of those viruses have already been identified by the scientific community, but at least 28 are new. About half survived at the time they were frozen not in spite of the ice, but because of it.

"These are viruses that would have thrived in extreme environments," said Matthew Sullivan, a co-author of the study and a microbiologist at Ohio State University. "These viruses have signatures of genes that help them infect cells in cold environments -- surreal genetic signatures for how a virus is able to survive in extreme conditions."