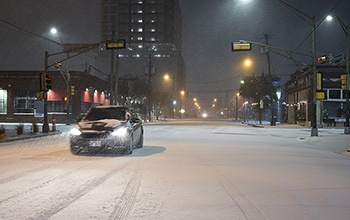 A car driving in the Dallas snowstorm of February 2021.

Amid debate about the influence of changes in the Arctic on extreme weather, a new study reports that rapid warming in the Arctic is a likely driver of recent extreme winter weather in the United States. The results are published in the journal Science.

The U.S. National Science Foundation-funded findings establish a link between climate change and a phenomenon called the stratospheric polar vortex, or SPV, disruption. While climate warming is anticipated to lead to increases in some weather extremes, including heat waves and precipitation events, it is not widely considered to drive severe winter weather events.

However, contrary to model predictions, winter weather extremes across the Northern Hemisphere -- intense snowfall events and anomalous cold snaps -- have reportedly become more frequent. One notable example is the U.S. Southern Plains cold wave of February 2021, which resulted in the collapse of the Texas energy grid and record damages estimated at nearly USD 200 billion, a cost substantially higher than recent high-impact hurricanes.

It is hypothesized that accelerated warming in the Arctic, also known as Arctic amplification or AA, is driving these events by disrupting the Arctic SPV -- an atmospheric feature defined by the strong westerly winds that encircle the Arctic and, under normal conditions, keep its cold air contained.

Whether AA and its impact on the SPV variability are linked to recent winter weather extremes has been unclear; observations and model predictions lack agreement. Building on previous work concerning SPV variability, atmospheric scientist Judah Cohen of Atmospheric and Environmental Research and the Massachusetts Institute of Technology and his colleagues combined observational analyses of the SPV over the last forty years with new climate model experiments.

"The study highlights the role of the stratosphere in the climate system and its potential far-reaching impacts on our surface weather," said Varavut Limpasuvan, a program director in NSF's Division of Atmospheric and Geospace Sciences. "It suggests that, in the era of AA, the elongation of SPV has become more prevalent and more influential as a harbinger of unusual wintertime conditions."

The results could be used to extend the warning lead time of cold extremes in Asia, Canada and the United States.