Scientists fabricate material that can sense and adapt to the environment

Metamaterial is responsive and acts without external direction 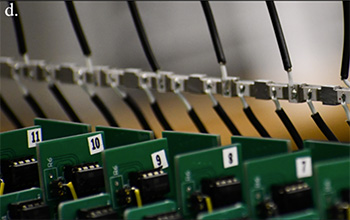 Scientists have developed a material that uses a computer chip to process and act on information.

Researchers at the University of Missouri and the University of Chicago, funded in part by the U.S. National Science Foundation, are developing an artificial material that can sense and respond to stimuli in the environment. The metamaterial can assess, adapt and act in response to its environment using a chip to process information and electricity to power motion. The team published the research in Nature Communications.

"Basically, we are controlling how this material responds to changes in external stimuli found in its surroundings," said Guoliang Huang, co-author of the study. "For example, we can apply this material to stealth technology in the aerospace industry by attaching the material to aerospace structures. It can help control and decrease noises coming from the aircraft, such as engine vibrations, which can increase its multifunctional capabilities."

The researchers' next step is to test and use the metamaterial in a real-world environment. The applications of responsive metamaterial could extend from aerospace and aviation to healthcare and manufacturing.

"This study recognizes the early career development of STEM researchers through programs such as NSF’s Graduate Research Fellowships, which supported a co-author of this paper,” said Lee Zia, acting director of NSF's Division of Graduate Education.