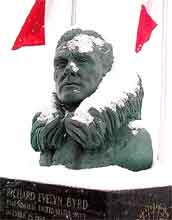 A bust of Richard E. Byrd at McMurdo Station is an Antarctic Treaty Historic Site.

To commemorate the historic flight that laid the groundwork for today's United States Antarctic Program, the National Science Foundation is making available video and still images of Richard E. Byrd's flight to the South Pole on Nov. 29, 1929, and of a commemorative flight earlier this month by a modern-day LC-130 cargo plane that retraced Byrd's route.

The material also includes scenes and interviews at the present day Amundsen-Scott South Pole Station, where scientists conduct year-round research. The video may be downloaded from satellite at the coordinates below on Monday, Nov. 29 and Tuesday Nov. 30.

Today, NSF maintains three year-round scientific stations in Antarctica, including the one at the geographic South Pole, and puts several hundred researchers into the field annually between October and February.

But 75 years ago, it was Byrd who paved the way by flying an early tri-motor aircraft into unknown territory, proving aircraft were up to the changes presented by the world's highest, driest, coldest and most forbidding continent.

His success made him a national hero, and Americans followed the news of his flight with the same intensity felt by their children a generation later as they followed the first moon landing.

The video contains an animation tracing Byrd's route and uses archival footage to show milestones of Byrd's flight. It contrasts his plane with the modern ski-equipped aircraft flown today. It also explain the scientific importance of the South Pole as a world-class observatory for studying the Earth's weather patterns and climate as well as a site for telescopes that look out into the far reaches of the cosmos and back in time to help show us how the universe came into being.