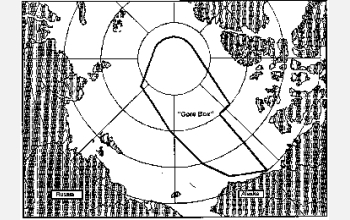 Map of Arctic Ocean where formerly classified submarine data are now being released for study.

A treasure-trove of formerly classified data on the thickness of sea ice in the Arctic Ocean, gathered by U.S. Navy submarines over several decades, is now being opened. Data from the first of approximately 20 cruise tracks -- an April, 1992 trans-Arctic Ocean track -- has just been released, and information from the rest of these tracks, or maps of a submarine's route, will be analyzed and released over the next year-and-a-half.

Climate modellers differ over the fate of the great expanse of Arctic sea ice, which is about the size of the United States. More than half the ice melts and refreezes each year.

"The Navy has collected data for decades on ice thickness in the Arctic, which was important to know for navigation and defense," said Ledbetter. "But this information is also extremely important to science, now giving us a history of sea ice that we could not collect any other way."

"The data is essential to building a baseline of sea-ice thickness in the Arctic basin to examine how global change affects ice cover," explained Walter Tucker of the U.S. Army Cold Regions Research and Engineering Laboratory. Tucker is supported by NSF to process and analyze all digital ice-draft data collected by Navy submarines in the Arctic since 1986. The National Snow and Ice Data Center at the University of Colorado-Boulder is handling the actual data release.

The Arctic Submarine Laboratory, on behalf of the Chief of Naval Operations, approved declassifying the sea-ice data within a specific swath of the Arctic Ocean, roughly between Alaska and the North Pole. The area is known as the "Gore Box" for Vice President Al Gore's initiative to declassify Arctic military data for scientific use.

The data will provide a historical context for current, more intensive studies of Arctic ice by the Surface Heat Budget of the Arctic Ocean (SHEBA) project, in which NSF has frozen a ship into the ice to serve as a floating science platform for 13 months. SHEBA's aim is to chart the fate of the pack ice, ultimately improving predictions of global change.