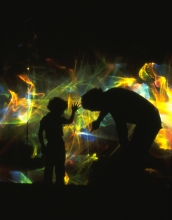 A hands-on introduction to science at the San Francisco Exploratorium.

The National Science Foundation (NSF) has announced a series of initiatives that will greatly expand efforts to inform the general public about nanotechnology, and to explore the implications of that fast-moving field for society as a whole.

The Nanoscale Informal Science Education Network. NSF has selected the Museum of Science, Boston, along with the Science Museum of Minnesota and the Exploratorium in San Francisco, to create and lead this network, which will also include many other science museums and research institutions (partial list below). The $20 million, five-year effort represents the largest single award NSF has given to the science-museum community, and will be a cornerstone of the foundation's multidisciplinary Nanoscale Science and Engineering Education program. The award was made by NSF's Informal Science Education program, with additional funding provided by 12 research programs from across the foundation.

Among the desired outcomes:

In addition, building on previously supported efforts, the foundation has funded nanotechnology-in-society projects at the University of South Carolina and at Harvard University.

All four of these efforts are being funded under the Nanoscale Science and Engineering program at NSF, which is one of 22 federal agencies in the government-wide National Nanotechnology Initiative. More specifically:

Taken together, these awards represent a new point of departure for NSF, explained Mihail Roco, NSF's Senior Advisor for Nanotechnology: "Since 2000 NSF has created 21 large centers and networks for nanotechnology," he said, each pursuing fundamental advances in topical areas from electronics, materials and biomedicine to manufacturing. "The two new networks are relevant to society and the public not only through their research and education targets, but also through their national goals, 50-state outreach programs and stakeholder participation. The nanotechnology field has been evolving rapidly since 2000, with technological, economic, social, environmental and ethical implications that could change our world."