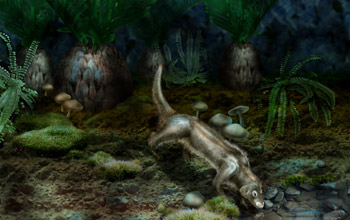 An international team of American and Chinese paleontologists has discovered a new species of mammal that lived 125 million years ago during the Mesozoic Era, in what is now the Hebei Province in China.

The new mammal, documented in the March 15 issue of the journal Nature, provides first-hand evidence of early evolution of the mammalian middle ear--one of the most important features for all modern mammals. The discovery was funded by the National Science Foundation (NSF).

"This early mammalian ear from China is a rosetta-stone type of discovery which reinforces the idea that development of complex body parts can be explained by evolution, using exquisitely preserved fossils," said H. Richard Lane, program director in NSF's Division of Earth Sciences, which co-funded the discovery with NSF's Division of Environmental Biology and its Assembling the Tree of Life (AToL) program.

Named Yanoconodon allini after the Yan Mountains in Hebei, the fossil was unearthed in the fossil-rich beds of the Yixian Formation and is the first Mesozoic mammal recovered from Hebei. The fossil site is about 300 kilometers outside of Beijing.

The researchers discovered that the skull of Yanoconodon revealed a middle ear structure that is an intermediate step between those of modern mammals and those of near relatives of mammals, also known as mammaliaforms.

"This new fossil offers a rare insight in the evolutionary origin of the mammalian ear structure," said Zhe-Xi Luo, a paleontologist at the Carnegie Museum of Natural History (CMNH) in Pittsburgh, Pa. "Evolution of the ear is important for understanding the origins of key mammalian adaptations."

Mammals have highly sensitive hearing, far better than the hearing capacity of all other vertebrates, scientists have found. Consequently, paleontologists and evolutionary biologists have been searching for more than a century for clues to the evolutionary origins of mammal ear structure.

Mammalian hearing adaptation is made possible by a sophisticated middle ear of three tiny bones, known as the hammer (malleus), the anvil (incus) and the stirrup (stapes), plus a bony ring for the eardrum (tympanic membrane).

The mammal middle ear bones evolved from the bones of the jaw hinge in their reptilian relatives. However, paleontologists long have attempted to understand the evolutionary pathway via which these precursor jaw bones became separated from the jaw and moved into the middle ear of modern mammals.

"Now we have a definitive piece of evidence, in a beautifully preserved fossil split on two rock slabs," said Luo. "Yanoconodon clearly shows an intermediate condition in the evolutionary process of how modern mammals acquired their middle ear structure."

Yanoconodon is about 5 inches (or 15 cm) long and estimated to weigh about 30 grams. Its teeth are notable for the three cusps in a straight line on molars (thus known as a triconodont) for feeding on insects and worms. It has a long body, short and sprawling limbs and claws that were ideal for either digging or living on the ground.

In addition to its unique ear structure, Yanoconodon also has a surprisingly high number of 26 thoracic ("chest") and lumbar ("waist") vertebrae, unlike most living and extinct terrestrial mammals that commonly have 19 or 20 thoracic and lumbar vertebrae. The extra vertebrae give Yanoconodon a more elongated body form, in contrast to its relatively shorter and very primitive limb and foot structures. The new mammal also has lumbar ribs, a rare feature among modern mammals.

"The discoveries of exquisitely preserved Mesozoic mammals from China have built the evidence such that biologists and paleontologists are able to make sense of how developmental mechanisms have impacted the morphological evolution of the earliest mammals," said Luo.

The article is authored by Luo and his collaborators, Peiji Chen and Gang Li of Nanjing Institute of Geology and Palaeontology, China, and graduate student Meng Chen of Nanjing University.