Family-Related Issues Top List of Reasons for Migration of Immigrant Scientists and Engineers to the U.S. 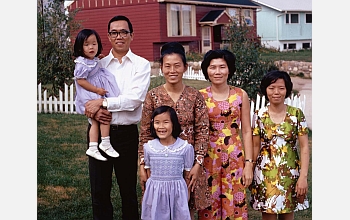 One-third of immigrant scientists and engineers come to the U.S. for family reasons.

The latest statistics from the National Science Foundation (NSF) reveal that more than one-third of immigrant scientists and engineers report that the most important reason they came to the United States was for family-related reasons (37 percent). Other reasons cited include educational opportunities (30 percent), and job or economic opportunities (21 percent).

The reasons for coming to the United States vary among different groups (by country, age at entry and place where higher education was completed).

"Even for individuals who came to the U.S. to pursue a higher education or to enter the labor force, family-related reasons were still cited as an important factor in the decision to come to the U.S.," said Nirmala Kannankutty and Joan Burrelli, both from NSF's Division of Science Resources Statistics and authors of the report.

There are more than 18.3 million native-born U.S. citizens who are scientists and engineers, while immigrants total more than 3.3 million. Migrants from India, China, Hong Kong, Macau, Philippines, Canada, United Kingdom, Korea and Taiwan make up the majority of those 3.3 million. Those who emigrated from China, Hong Kong or Macau had the highest percentage (75 percent) of individuals with one or more degrees in science and engineering fields.

Data are from the 2003 Scientists and Engineers Statistical Data System, which integrates three large demographic and workforce surveys of individuals conducted by NSF: the National Survey of College Graduates, the National Survey of Recent College Graduates and the Survey of Doctorate Recipients. These surveys collected data from 102,350 individuals representing a population of about 21.6 million scientists and engineers.

The InfoBrief, Why Did They Come to the United States? A Profile of Immigrant Scientists and Engineers (NSF 07-324), is available on NSF's Division of Science Resources Statistics Web page: http://www.nsf.gov/statistics/infbrief/nsf07324/.

Related Websites
Why Did They Come to the United States? A Profile of Immigrant Scientists and Engineers (NSF 07-324): http://www.nsf.gov/statistics/infbrief/nsf07324/