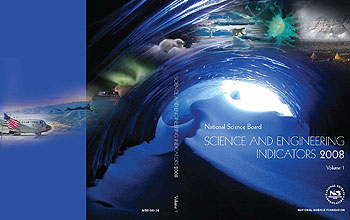 Members of the National Science Board today delivered to the President and the Congress Science and Engineering Indicators 2008 (SEI'08), the Board's biennial report on the state of science and engineering research and education in the United States.

Called the "gold standard," it is the most comprehensive source of information on research and development conducted by universities, industry, the federal government and the international science and engineering enterprise.

Today was the earliest release date for any issue of the Science and Engineering Indicators (SEI) series.

The Board also introduced its new publication, Digest of Key Science and Engineering Indicators 2008, another policy neutral document, containing a selected set of indicators electronically linked with detailed data tables and discussions in the main volumes of SEI.

In addition to SEI'08, the Board, concerned that the data revealed disturbing trends with serious policy implications, published a companion piece, Research and Development: Essential Foundation for U.S. Competitiveness in a Global Economy. In this policy statement and in presentations in the U.S. House of Representatives, National Science Board Chairman Steven Beering, Subcommittee Chairman on SEI'08 Louis Lanzerotti and SEI'08 Subcommittee Member Arthur Reilly stressed the need for increased government and industry sharing of funding for basic research.

"These indicators come at an important time," said Chairman Beering. "The confluence of a range of indicators raises key questions about future U.S. high-technology industry's competitiveness in international markets and implications for highly skilled jobs at home."

The Board made three major recommendations:

SEI is prepared by NSF's Division of Science Resources Statistics (SRS) on behalf of the National Science Board. It is subject to extensive review by outside experts, interested federal agencies, Board members and SRS internal reviewers for accuracy, coverage and balance.

The National Science Board was established by Congress in 1950, and has two roles. It provides oversight for, and establishes the policies of, the National Science Foundation. It also serves as an independent body of advisors to both the President and Congress on broad national policy issues related to science and engineering research and education.

Note: What follows is a sampling of "13 Prime" indicators that illustrate what some of the data show.

Science and Engineering Indicators 2008 tell a mixed story regarding the achievement of U.S. students in science and math in international comparisons.

The capability to do science and technology work increased throughout the world, and the National Science Foundation is out front tracking the trends.

The U.S. is the largest, single, R&D-performing nation in the world supplying an estimated $340 billion for R&D in 2006, a record high.

Based on key indicators, the U.S. sustained a relative economic advantage over other developed and developing economies. Growth has been far more rapid in the emerging markets of China and India.

U.S. public support for government funding of scientific research is strong and growing.

Academic scientists and engineers are more diverse today, and federal funding remains important to them.