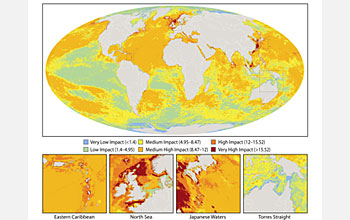 Marine ecosystems worldwide have been widely affected by human activities.

More than 40 percent of the world's oceans are heavily affected by human activities, and few if any areas remain untouched, according to the first global-scale study of human influence on marine ecosystems.

By overlaying maps of 17 different activities such as fishing, climate change and pollution, the researchers have produced a composite map of the toll that humans have exacted on the seas.

The work, published in this week's issue of Science, was conducted at the National Science Foundation (NSF)'s National Center for Ecological Analysis and Synthesis (NCEAS) at the University of California at Santa Barbara, and involved 19 scientists from a range of universities, NGOs, and government agencies.

The study synthesized global data on human impacts to marine ecosystems such as coral reefs, seagrass beds, continental shelves and the deep ocean.

"This research is a critically needed synthesis of the impact of human activity on ocean ecosystems," said David Garrison, biological oceanography program director at NSF. "The effort is likely to be a model for assessing these effects at local and regional scales."

Past studies have focused largely on single activities or single ecosystems in isolation, and rarely at the global scale. In this study the scientists were able to look at the summed influence of human activities across the entire ocean.

"This project allows us to finally start to see the big picture of how humans are affecting the oceans." said lead scientist Ben Halpern of NCEAS. "Our results show that when these and other individual impacts are summed up, the big picture looks much worse than I imagine most people expected. It was certainly a surprise to me."

The study reports that the most heavily affected waters in the world include large areas of the North Sea, the South and East China Seas, the Caribbean Sea, the east coast of North America, the Mediterranean Sea, the Red Sea, the Persian Gulf, the Bering Sea and several regions in the western Pacific. The least affected areas are largely near the poles.

"Unfortunately, as polar ice sheets disappear with warming global climate and human activities spread into these areas, there is a great risk of rapid degradation of these relatively pristine ecosystems," said Carrie Kappel, a scientist at NCEAS.

"There is definitely room for hope," added Halpern. "With targeted efforts to protect the chunks of the ocean that remain relatively pristine, we have a good chance of preserving these areas in good condition."

The research involved a four-step process. First, the scientists developed techniques to quantify and compare how different human activities affect each marine ecosystem. For example, fertilizer runoff has been shown to have a large effect on coral reefs but a much smaller one on kelp forests.

Second, the researchers gathered and processed global data on the distributions of marine ecosystems and human influences.

Then the scientists combined data from the first and second steps to determine "human impact scores" for each location in the world.

Finally, using global estimates of the condition of marine ecosystems from previous studies, the researchers were able to ground-truth their impact scores.

Despite all this effort, the authors acknowledge that their maps are still incomplete, because many human activities are poorly studied or lack good data.

"Our hope is that as more data become available, the maps will be refined and updated," said Fio Micheli, a scientist at Stanford University. "But this will almost certainly create a more dire picture."

This study provides critical information for evaluating where certain activities can continue with little effect on the oceans, and where other activities might need to be stopped or moved to less sensitive areas.

As management and conservation of the oceans turns toward marine protected areas (MPAs), ecosystem-based management (EBM) and ocean zoning to manage human influence, such information will prove invaluable to managers and policymakers.

"Conservation and management groups have to decide where, when, and what to spend their resources on," said Kimberly Selkoe, a scientist at the University of Hawaii. "Whether one is interested in protecting ocean wilderness, assessing which human activities have the greatest impact, or prioritizing which ecosystem types need management intervention, our results provide a strong framework for doing so."

"My hope is that these results serve as a wake-up call to better manage and protect our oceans, rather than a reason to give up," added Halpern.

"Humans will always use the oceans for recreation, extraction of resources, and for commercial activity such as shipping. Our goal, and really our necessity, is to do this in a sustainable way so that our oceans remain in a healthy state and continue to provide us the resources we need and want."