Getting to the Roots of Sunflower Cultivation 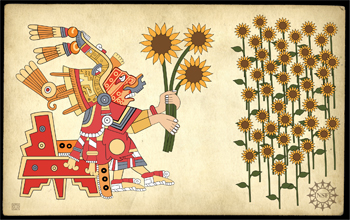 An artist's interpretation of sunflower farming in the Aztec culture.

Global warming could affect one of the world's major oil seed crops, the sunflower. Drawing on genetic information from early plant stocks is key to improving future harvests.

This is the view of David Lentz, a professor in the Department of Biological Sciences at the University of Cincinnati in Ohio, who has been studying the origins of domesticated sunflowers since an initial sunflower discovery in Tabasco, Mexico, in 2000.

"It is very hard to extract genetic information from archaeological sunflower plants," says Lentz. "But it is important to know where our crop plants originated for breeding purposes and for conservation. We need to try to preserve every bit of genetic information we can to insure flexibility in future breeding efforts."

Lentz's new research report, published in the Proceedings of the National Academy of Sciences, confirms his earlier finding that sunflowers were domesticated twice, once in the eastern part of the Mississippi Valley about 3,200 years ago, and independently in Mexico about 4,600 years ago. It also stirs up past controversy surrounding the previous finding.

"Some researchers don't want to believe sunflowers were domesticated as a crop in Mexico prior to domestication in North America," says Lentz, who conducted his research with an international team of researchers from Ohio, Florida and Mexico.

"They refuse to believe it, even though the evidence shows Mexicans cultivated foods such as squash, corn and beans as early as 10,000 years ago, in 8000 B.C."

Lentz and his co-authors argue that their recently reported discovery of three well-preserved achenes, the fruit of the sunflower that contains the seed, confirms early Mexican domestication.

The achenes, discussed in the team's 2008 report, date from around 300 B.C., that is, 1,800 years before the Spanish Conquest of Mexico led by Hernando Cortez. The achenes, found in a dry cave in Cueva del Gallo, a site in the central Mexican state of Morelos, have unmistakable sunflower traits that blunt criticism of the previous San Andrés finding.

"We have the earliest fully domesticated sunflower seeds from Mexico at San Andres and also we have sunflower, huge seeds, from Cueva del Gallo," says Lentz. "A careful examination of the early Spanish literature about Aztec plant uses reinforces this idea, too. The more we look, the more we find. An independent domestication hypothesis is the best explanation for these facts."

To verify the earlier findings and seek out new sources of genetic material, the research team of archeologists, biologists, and experts on the use of plants in ancient cultures returned to Mexico for further investigation.

The researchers documented archaeological and language data, as well as descriptive field data, from current and past Mesoamerican societies. The team found that a number of indigenous groups, such as the Otomi and the Nahua, had words in their languages for sunflower that were not related to Spanish words for sunflower. This indicates that sunflower use for these indigenous people predated the Spanish expeditions of the early 1500s.

The Otomi use the name "dä nukhä," which translates to "big flower that looks at the sun god," a reference to pre-Columbian solar worship. The Otomi still use sunflowers as an ornament in their churches.

Lentz and his co-authors argue that the conquering Spaniards had reasons to discourage the use of sunflowers in Mexico. "In fact, they may have discouraged sunflower's use because of its association with rituals and other practices Spanish priests would not have approved," says Lentz.

For example, sunflowers were believed to be a powerful aphrodisiac. Although there is no basis for this belief, it may have contributed to a lack of evidence of sunflowers in Mexico, which encouraged modern-day scholars to assume that North America was the first to domesticate this crop.

Other than in its very early history, there is not much mention of sunflowers in Mexico. However, North American history has many references to sunflowers as a Native American crop. When scientific crop breeders started experimenting with sunflowers, they worked with the plant's genetic resources from Native American sources.

Now crop breeders may want to look to the hotter, drier climates of the south to improve sunflower harvests as farmers anticipate effects from global warming.