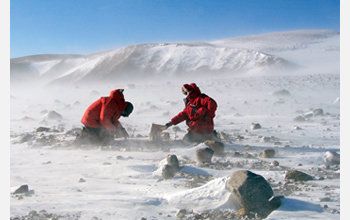 John Goodge and a colleague collecting specimens in the Transantarctic Mountains.

A lone granite boulder found against all odds high atop a glacier in Antarctica may provide additional key evidence to support a theory that parts of the southernmost continent once were connected to North America hundreds of millions of years ago.

Writing in the July 11 edition of the journal Science, an international team of U.S. and Australian investigators  describe their findings, which were made in the Transantarctic Mountains, and their significance to the problem of piecing together what an ancient supercontinent, called Rodinia, looked like. The U.S. investigators were funded by the National Science Foundation (NSF).

Previous lines of scientific evidence led researchers to theorise that about 600-800 million years ago a portion of Rodinia broke away from what is now the southwestern United States and eventually drifted southward to become eastern Antarctica and Australia.

"What this paper does is say that we have three main new lines of evidence that basically confirm the SWEAT idea," said John Goodge, an NSF-funded researcher with the Department of Geological Sciences at the University of Minnesota-Duluth.

Added Scott Borg, director of the division of Antarctic sciences in NSF's Office of Polar Programs, "this is first-rate work and a fascinating example of scientists at work putting together the pieces of a much larger puzzle. Not only do the authors pull together a diverse array of data to address a long-standing question about the evolution of the Earth's crust during a critical time for biological evolution, but the research shows how the ideas surrounding the SWEAT hypothesis have developed over time."

As a field researcher during the late 1980's and early 1990's, Borg authored papers on the SWEAT hypothesis.

The boulder find came by serendipity while the researchers were picking though rubble carried through the Transantarctic Mountains by ice streams-rivers of ice-that flow at literally a glacial pace from East Antarctica.

Goodge and his team were searching for rocks that might provide keys to the composition of the underlying continent crust of Antarctica, which in most places is buried under almost two miles of ice.

"We were picking up boulders in the moraines that looked interesting," Goodge said. "It was basically just a hodge-podge of material."

One rock in particular, small enough to heft in one hand, found atop the Nimrod Glacier, was later determined to be a very specific form of granite with, as Goodge describes it, "a particular type of coarse-grained texture."

Subsequent chemical and isotopic tests conducted in laboratories in the United States revealed that the boulder had a chemistry "very similar to a unique belt of igneous rocks in North America" that stretches from what is now California eastward through New Mexico to Kansas, Illinois and eventually through New Brunswick and Newfoundland in Canada.

That belt of rocks is known to have been a part of what is called Laurentia, which was a component of the supercontinent of Rodinia.

"There is a long, linear belt of these igneous rocks that stretches across Laurentia. But 'bang' it stops, right there at the (western) margin where we knew that something rifted away" from what is now the West Coast of the United States," Goodge said.

"It just ends right where that ancient rift margin is," Goodge said. "And these rocks are basically not found in any other part of the world."

That it should turn up on a glacier high up in the mountains of Antarctica is strong evidence in support of the SWEAT model that parts of North America continue into part of the frozen continent at the bottom of the Earth.

"There's no other explanation for how it got where we found it," Goodge said. "It was bull-dozed over from that interior region of Antarctica."

The find itself is compelling to geologists, Goodge noted, because little other physical evidences exists to allow them directly to put together the jigsaw puzzle of the long-disappeared Rodinia.

But because the supercontinent existed at a key time in the development of multi-cellular life on Earth, it also helps provide a geological context in which this massive biotic change took place.

"During the Cambrian explosion about 520 million years ago we started seeing this huge expansion in the diversity of life forms," Goodge said. "This was also a time when the Earth was undergoing tremendous geologic changes."

He added that "something helped trigger that big radiation in life."

The shifting configuration of the continents, accompanied by collisions between landmasses, erosion and the influx of chemicals into the seas may well have provided the nutrients to that growing diversity of lifeforms.

"There are ideas developing about these connections between the geo-tectonic world on the one hand and biology on the other.

The job of geoscientists in this context, he said "is to reconstruct what the world was like at the time."