Aging Brains Are Different in Humans and Chimpanzees 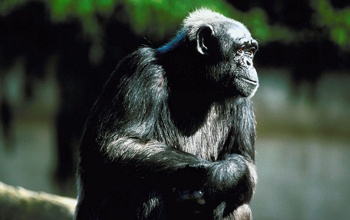 The brains of chimpanzees do not shrink to the same extent as humans as they age.

Brains shrink in humans, potentially causing a number of health problems and mental illnesses as people age, but do they shrink to the same extent in the closest living relatives to humans--the chimpanzees?

Chet Sherwood, an anthropologist at The George Washington University in Washington, D.C., and a team of scientists from seven other U.S. universities put forward the question to see if comparable data on the effects of aging could be found in chimpanzees. Such data on regional brain volumes in chimpanzees was not available, until now.

The researchers--anthropologists, neuroscientists, psychologists, biologists, and veterinary professionals--used magnetic resonance imaging (MRI) to measure the space occupied by various brain structures in adult humans and chimpanzees, including the frontal lobe and the hippocampus, an area of the brain associated with short-term and long-term memory.

They found chimpanzees do not display significant loss, or atrophy, in the size of their brains and other internal structures as they age.

Instead, Sherwood and colleagues suggest that as humans evolved the ability to live longer, the result was a "high degree of brain degeneration" as people get older.

The current issue of Proceedings of the National Academy of Sciences reports the findings. The National Science Foundation (NSF) partially funded the research.

Because humans and chimpanzees grow, develop and age on different schedules, the study compared humans from age 22 to 88 and chimpanzees from age 10 to 51. For both species, this encompassed the whole adult lifespan under natural conditions. Humans have a longer lifespan than chimpanzees. In the wild, the lifespan of chimpanzees is about 45 at the oldest. With medical care in captivity, they can live into their 60s. On the other hand, humans without access to modern medical care and who live in traditional hunter-gatherer societies can live to their mid-80s.

"Traits that distinguish humans from other primates include enlargement of the brain and increased longevity," they write in the report "Aging of the Cerebral Cortex Differs Between Humans and Chimpanzees."

Consequently, they say, humans are unique among animals in being susceptible to certain neuropathologies, such as Alzheimer's disease, in the later stages of life. Even in the absence of disease, however, healthy aging in humans is marked by variable degrees of neural deterioration and cognitive impairment.

"This is an excellent example of research that has implications for societal benefits," said NSF Physical Anthropology Program Officer Kaye Reed. "While Dr. Sherwood and colleagues are interested in the evolutionary significance of brain differences between chimpanzees and humans, the results of this research can be used as a basis to explore degenerative brain diseases, such as Alzheimer's, in a medical context."

"This research points to the uniqueness of how severe brain aging is in humans," said Sherwood. "While there are certainly many similarities between humans and other animals in the degenerative processes that occur in the brain, our research indicates that even healthy, normal aging in humans involves more pronounced brain deterioration than in other species.

"Taken together with particular environmental and genetic risk factors, this might help to explain the fact that only humans are vulnerable to developing dementing illnesses like Alzheimer's disease in old age."

Sherwood and colleagues conclude evolution led to both a large brain and a long lifespan in humans. They point out that the benefits of these traits are much debated, but they surmise it might be related to an increased reliance on social learning of skills.

"As a result, we suggest that the high energy cost of a large brain in humans leads to more wear and tear that cannot be easily repaired because most neurons are not renewed," said Sherwood. "As a consequence, human brains become more vulnerable to degeneration towards the later stages of life."

In addition to NSF, the National Institutes of Health, the James S. McDonnell Foundation, the Mathers Foundation and a Yerkes Center Grant supported the research.