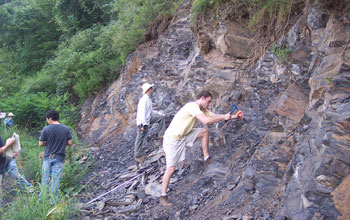 Over the last half-billion years, the ocean mostly has been full of oxygen and teeming with animal life. But earlier, before animals evolved, oxygen was harder to come by.

Now a new study, led by researchers at the University of California, Riverside (UCR), reveals that the ancient deep ocean was not only devoid of oxygen but also rich in iron, a key biological nutrient for nearly a billion years longer than previously thought--right through a key evolutionary interval that culminated in the first rise of animals.

"The implications are far-reaching," said Timothy Lyons, a biogeochemist at UCR and the principal investigator of the study, which was funded by the National Science Foundation (NSF).

"We will need to rethink, in a fundamental way," says Lyons, "all our models for how life-essential nutrients were distributed in the ocean through time and space."

The results appear in this week's issue of the journal Nature.

"This study addresses major gaps in our knowledge about the co-evolution of life and the chemistry of the oceans 2.5-0.5 billion years ago, and points to the need for geochemical data from widely distributed deposits," says Enriqueta Barrera, program director in NSF's Division of Earth Sciences.

Most scientists agree that the early Earth, before 2.4 billion years ago, contained only trace quantities of oxygen and that the oceans were full of dissolved iron.

But there is far less agreement among scientists about the chemical composition of the oceans during the middle chapters of Earth's history in the wake of atmospheric oxygenation--about 2.4 to 0.5 billion years ago--when the diversity of organisms that we know today, including the animals, first got their footing.

Classic models for this time window maintain that the oceans, at all depths, became rich in oxygen in parallel with its first accumulation in the atmosphere.

This increase in oxygen in seawater has been linked to the disappearance of iron ore deposits known as "banded iron formations," the source of almost all the iron used to make steel today.

Oxygen, the argument goes, would have "rusted" the oceans, stripping them of dissolved iron.

More than a decade ago, however, another idea gained traction: hydrogen sulfide.

Produced by bacteria in the absence of oxygen, hydrogen sulfide, it was argued, might instead have scrubbed the iron out of the ocean during Earth's middle history, dealing the fatal blow to iron deposits.

In an ocean full of hydrogen sulfide, diverse life-sustaining elements, including iron, can be stripped from the seawater, potentially causing a biotic crisis.

"The problem all along was a general lack of evidence in the oceans for the amounts of oxygen, iron, and sulfide in Earth's middle history, particularly in a critical billion-year window between roughly 1.8 and 0.8 billion years ago," says Noah Planavsky, a doctoral student at UCR and lead author of the paper.

"Some earlier work supported a return to an iron-rich ocean 0.8 billion years ago. Rather than a return, however, we predicted that iron may have dominated the deep ocean continuously right up to oxygenation and the rise of animals a mere half-billion years ago."

Planavsky and his colleagues at UCR and in Canada, Australia, and China sought to remedy the data deficiency.

New rock samples they collected from across the globe suggest a previously unknown continuity in ocean chemistry over much of its history.

These data, the first of their kind, point toward continuous oxygen-poor, iron-rich conditions for 90 percent of Earth's history, with oxygen and hydrogen sulfide, when present, limited mostly to the surface layers and along the margins of the oceans, respectively.

The task now is to reconsider whether the purported shortages of nutrients attributed to widespread hydrogen sulfide were indeed real, and a throttle on early evolution.

"Our new knowledge that the deep ocean was anoxic and iron-rich does not mean life had it easy, though," Lyons says. "Enough sulfide could have persisted around the edges of the ocean to severely limit other key nutrients. We are still testing this hypothesis."

The researchers' results also indicate that neither oxygen nor hydrogen sulfide turned off iron deposition around 1.8 billion years ago, when the last major iron ores were seen.

They suggest instead that hydrothermal systems on the seafloor are the most important factor controlling the distribution of iron ore.

"These hydrothermal systems are high-temperature vents on the seafloor tied to magmatic activity, and they can pump huge amounts of iron into the oceans," Planavsky explains.

"Previous researchers have suggested that there was a decrease in the amount of iron from hydrothermal systems around 1.8 billion years ago. Our results support this idea with compelling physical evidence, while showing that iron could persist in the oceans at levels below those necessary to form ore deposits."

"The next step," Lyons adds, "is to better merge this refined chemical perspective with traditional and emerging views of evolving life, recognizing that life and the environment co-evolve in an intimate dance of cause-and-effect relationships."

Planavsky and Lyons were joined in the study by Clint Scott, Chao Li, Chris Reinhard, Amy Kelly and Gordon Love all of UCR; Peter McGoldrick of the University of Tasmania; Xuelei Chu of the Chinese Academy of Sciences; and Andrey Bekker of the University of Manitoba, Canada.