Large-scale warming events 10,000-plus years ago triggered loss of oxygen 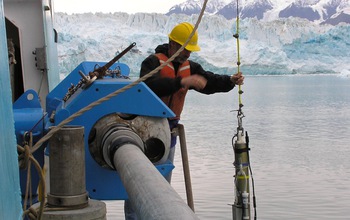 A new study has found a link between abrupt ocean warming at the end of the last ice age and the sudden onset of low-oxygen, or hypoxic, conditions that led to vast marine dead zones.

Results of the research, which was funded by the National Science Foundation (NSF), are published today in the journal Nature.

"This work tackles a longstanding debate about what causes expansion of oxygen minimum zones, also known as dead zones, in the oceans," said Candace Major, a program director in NSF's Division of Ocean Sciences. "The results demonstrate a link between warming surface temperatures and dead zones at great depths. The findings also show that the response time between warming and dead zone expansion is quite fast."

Large-scale warming events at about 14,700, and again at 11,500, years ago occurred rapidly and triggered loss of oxygen in the North Pacific, raising concern that low-oxygen areas will expand again as the oceans warm in the future.

Anomalous warmth that occurred recently in the northeastern Pacific Ocean and the Bering Sea -- dubbed "The Blob" -- is of a scale similar to events documented in the geologic record. If such warming is sustained, oxygen loss becomes more likely.

Although many scientists believe that a series of low-oxygen dead zones in the Pacific Ocean off Oregon and Washington during the last decade may be caused by ocean warming, evidence confirming that link has been sparse.

The new study, however, found a clear connection between two historic intervals of abrupt ocean warming that ended the last ice age with an increase in the flux of marine plankton sinking to the seafloor, ultimately leading to a sudden onset of low-oxygen conditions, or hypoxia.

"Our study reveals a strong link between ocean warming, loss of oxygen and an ecological shift to favor diatom production," said paper lead author Summer Praetorius of the Carnegie Institution for Science. "During each warming event, the transition to hypoxia occurred abruptly and persisted for about 1,000 years, suggesting a feedback that sustained or amplified hypoxia."

Warmer water, by itself, is not sufficient to cause diatom blooms, nor hypoxia, the researchers note.

Just as warming soda loses its fizzy gas, warmer seawater contains less dissolved oxygen, and this can start the oxygen decline. But it isn't until accelerated blooming of microscopic diatoms, which have large shells and tend to sink more rapidly than other smaller types of plankton, that de-oxygenation is increased.

Diatoms are known to thrive in warm, stratified water, but they also require sources of nutrients and iron, according to Alan Mix of Oregon State University (OSU), a co-author of the paper.

There are some competing effects, and the final story depends on which one wins. Warming may, for a time, decrease mixing from below, but if the major nutrients are there, as they are in the high north Pacific, then warming favors plankton growth.

"The high-latitude north Pacific is rich in common nutrients such as nitrate and phosphate, but it is poor in iron and that seems to be the key," Mix said. "A partial loss of oxygen causes a chemical reaction that releases iron previously trapped in continental margin sediments. That iron then fuels diatoms, which bloom, die and sink to the seafloor, consuming oxygen along the way."

The concern is how rapidly the ocean may respond, the researchers said.

"Many people have assumed that climate change effects will be gradual and predictable," Mix said, "but this study shows that the ecological consequences of climate change can be massive and can occur pretty fast with little warning."

Because the competing effects of mixing and iron may happen on different timescales, the exact sequence of events may be confusing.

On the scale of a few years, mixing may win, but on the scale of decades to centuries, the bigger effects kick into gear. The geologic record studied by the scientists emphasized these longer scales.

The new discovery was the result of a decades-long effort by numerous researchers at OSU to collect marine sediment cores from the north Pacific, creating comprehensive, high-resolution records of climate change in the region.

In addition to "The Blob" of unusually warm ocean temperatures seen across the north Pacific, this year has had a record-breaking algae bloom dominated by a certain species of diatom.

"While it's too soon to know how this event ties into the long-term climate patterns that will emerge in the future," Praetorius said, "current conditions seem eerily reminiscent of past conditions that gave way to extended periods of hypoxia."